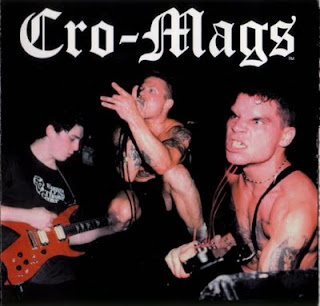 This past Friday night (July 6th), the CBGB Fest show that was taking place at New York City's Webster Hall, was cancelled after two current members of the CRO MAGS were stabbed by Harley Flanagan (the founding member of the CRO MAGS). The incident occurred right after VISION OF DISORDER's set!

As see on the NY Post: Around 8:15 PM, while the CRO MAGS were getting ready to take the stage, Harley Flanagan, 42, made his way into the venue’s VIP section toward the bands dressing room, sending nearly 30 guests on the balcony into a frenzy, law enforcement sources and witnesses said.

According to the NY Post, William Berario, 45, was slashed above the eye and bitten on his cheek. Michael "The Gook" Couls, 33 (current CRO MAGS bassist & member of the DMS crew) was cut on his arm and stomach.

Both members of CRO MAGS were taken to Bellevue Hospital with non life-threatening wounds.

Click here for all the details on this story!

The band members of the CRO MAGS have released the following statement regarding this matter:

"WE... as a band are truly sorry for the way it all turned out in every regard even the ex-member who's family is now effected by his choices. Our prayers go out to them as well as Mike C., and the others who were hurt, but it was 'his' choice to come to our concert with a hunting knife, standing by our dressing door. Who knows what his actual intent was, obviously he wasn't there with it to cut bread for a peace offering as he was heard saying outside he was putting an end to us playing without him. Let's move on now & stop the trash-talking. Keep that PMA - that's what we are all"