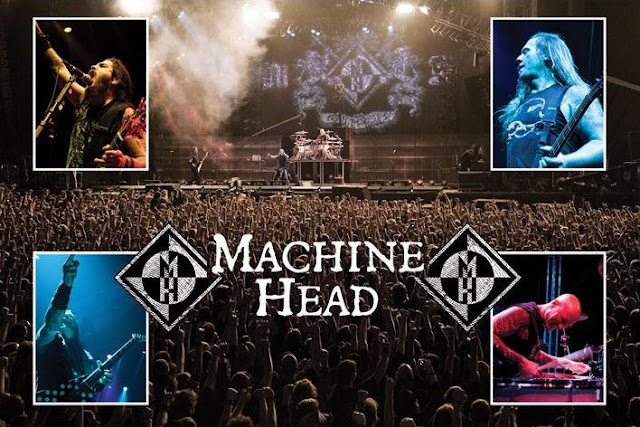 As previously reported, Bay Area Metallers MACHINE HEAD were honored with the "Best International Band" award at the 2012 Metal Hammer Awards in Berlin, Germany! As we all know, the best way to experience the almighty Machine Head is in the live setting. The Northern California band has established itself as one of the best live acts in the Hard Rock and Metal world, bringing venues and crowds to their knees with flawless onstage execution of their songs. Few, if any, of their peers can deliver the type of sweat-soaked, utterly deafening and fully punishing live sets that the band turns in night after night with near-religious fervor in their native U.S. and across the globe.

That's why the band, who routinely shake the bedrock and foundation of venues, had to put its live fury on tape…again.

The band will release 'Machine Fucking Head Live' on November 13. It's Machine Head's second live effort; 'Hellalive' was released in 2003. Nine years have passed and Machine Head still slay and administer a "Bay Area Beatdown" in the live realm.

'Machine Fucking Head Live' was recorded at various tour stops across the globe last year. It includes songs from the band's expansive catalog, including pit-stirring crowd favorites such as "Imperium," "Aesthetics of Hate," "Locust" "Ten Ton Hammer," "This Is The End" and of course, "Halo."

"The Head Cases have been so intense on this tour cycle that we had to start capturing the shows, especially with technology making it so much easier to record," said frontman Robb Flynn. "We culled some of the best nights where the band and crowd were on fire and made a bad ass, nearly two-hour, double live album, which is a great documentation of where the band is at 18 years deep."

Machine Head continue to support their latest masterwork, 2011's 'Unto the Locust'. The single "Darkness Within" is shipping to Rock radio in early October and the band will embark on a "must see" fall tour with Dethklok, All That Remains and Black Dahlia Murder in October (details below).

Related links:
MACHINE HEAD's Official Site
Brought to you by HornsUpRocks.com at 10:47 AM