Black Skies Check In From The Road + Live Song Posted! 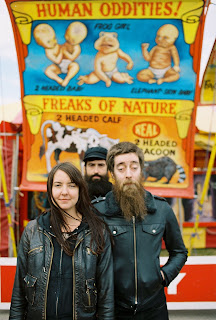 North Carolina power trio Black Skies have been ravaging the North American masses since November 14th on their 2011 Fall tour excursion in support of the recently unleashed "On The Wings Of Time" full-length.

The band checks in from the tour van:

"The tour is going great! We've played some of our favorite venues, hit some new ones and had a great first time playing Canada! The crowd, promoters and venues in Montreal and Toronto were very welcoming and we look forward to going back! We've been playing songs off our new record for the most part including a tune we hadn't really played out live before and a May Blitz cover on some nights. It's been a blast being back out. Our friends Make from Chapel Hill were on the first half of the tour with us. It's been great to share the stage with these guys every night. They're an excellent band, and good, fun people to hang with. We joined up with Vaz in Montreal for a string of dates. It's time to take over Easthampton, Brooklyn, Philadelphia and Annandale!"

In addition, you can check out a live recording from the band's first show of the tour at the Get Down in Asheville, North Carolina.

Email ThisBlogThis!Share to TwitterShare to FacebookShare to Pinterest
Labels: black skies, heavy music, horns up rocks, on the wings of time, stoner metal