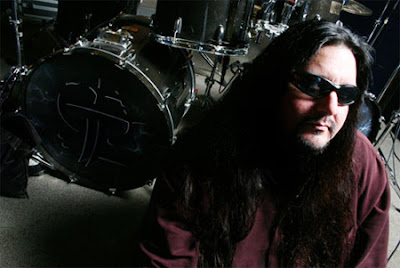 Eugene Victor Hoglan II, known by many of you as Gene Hoglan or "The Atomic Clock", is one of the best drummers in the world. During his 27 year career he has played in bands such as Strapping Young Lad, Testament, Fear Factory, Dark Angel, War God and Dethklok. He recently stepped in for Testament drummer Paul Bostaph, who suffered a serious injury, and recorded drums for Testament's 10th studio album entitled "The Dark Roots Of Earth". He also performed with Testament on a few select shows during the bands recent tour with Anthrax and Death Angel.

Today, it was announced that Gene "The Atomic Clock" Hoglan has joined forces with RealLesson.com to offer a unique chance for fans and musicians to receive live, interactive lessons online from one of the best drummer in Heavy Metal today.

What is RealLesson.com? "RealLesson.com is your outlet for taking live, interactive lessons online or in person. During the site's pre-launch phase, we are having great success in attracting and securing a wide variety of teachers! There is no limit to the style/genre of the teacher, so you will have no shortage of qualified teachers to learn from. We will not only be providing lessons with musicians, but also sound engineers, tour managers, lighting/stage professionals and other relative categories of instruction."

Here is a previous interview we conducted with Gene Hoglan, in which he discusses his air drumming techniques!

Official Site of Gene Hoglan
Gene Hoglan on MySpace
Brought to you by HornsUpRocks.com at 12:53 PM