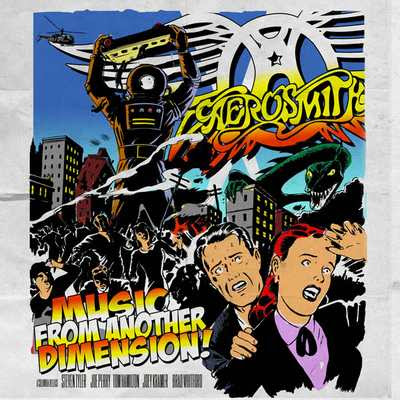 Legendary Hard Rock band AEROSMITH, will be releasing their 15th studio album 'Music From Another Dimension on August 28th via Columbia Records. Today, you can watch a preview of their first single "Legendary Child" below.

The clip was filmed with director Casey Patrick Tebo, who also is producing a NEW concert film titled 'Aerosmith: Rock For The Rising Sun'. According to Tebo's official web site, the movie, which will focus on AEROSMITH's relationship with the group's Japanese fans, will be released later this year or in 2013.

"Legendary Child" last week landed on Billboard's Mainstream Rock chart at No. 32 and the Hard Rock Digital Songs chart at No. 2. On the former chart, the song is the group's first entry since 2006, when "Devil's Got a New Disguise" reached No. 15. The song was also supposed to be included in the upcoming summer film "G.I. Joe: Retaliation", but that movie was abruptly bumped from its June 29 release date to March 2013.

'Music From Another Dimension' track listing:

Related links:
AEROSMITH's Official Site
Brought to you by HornsUpRocks.com at 6:34 PM