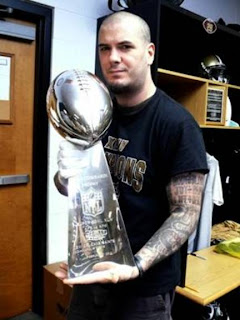 Former Pantera and current Down vocalist Phil Anselmo ripped the NFL, Roger Goodell, Peter King Sports Illustrated for their handling of bountygate and punishing his beloved New Orleans Saints with unsubstantiated evidence. Listen to what Anselmo had to say on the video below.

As previously reported, NOLA's supergroup DOWN is scheduled to release four EP's dubbed as 'Down IV' throughout the next four years. During a recent interview the bands riff meister Kirk Windstein announced that the first EP, which contains six songs, should be out this summer! This is what Anselmo had to say about this:

"That's the idea right now, but I think that after you work on a body of music, you need to reload, you need to refresh, you need to clear your head. Get that, digest it, get it out of your system, and then decide what direction you're going to go. It's a good idea and I think we should see it through. But there's no way we can rush it. Because I think if it is a series of four, each one should be unique, and that… We've shown flexibility — we have songs like 'Bury Me In Smoke' and then we have songs like 'Stone The Crow'… acoustic pieces and what-not… We have all that. So we've touched on many, I guess, dynamics, so… I would expect each EP to have its own life."


Down's NEW EP will feature the following songs in no particular order:

Related links:
DOWN
Brought to you by HornsUpRocks.com at 3:49 PM