What Happened Last Night At Webster Hall? Who Were The Victims? Why Did It Happen? Find Out Now! 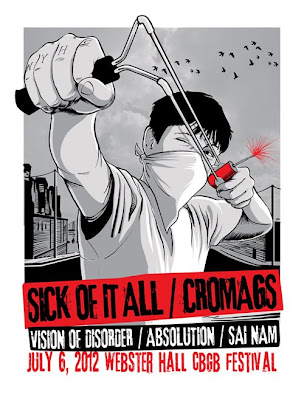 Last night, the CBGB Fest show that was taking place at New York City's Webster Hall, was cancelled after two current members of the CRO MAGS were stabbed by Harley Flanagan (the founding member of the CRO MAGS). The incident occurred right after VISION OF DISORDER's set!

As see on the NY Post: Around 8:15 PM, while the CRO MAGS were getting ready to take the stage, Harley Flanagan, 42, made his way into the venue’s VIP section toward the bands dressing room, sending nearly 30 guests on the balcony into a frenzy, law enforcement sources and witnesses said.

According to a witness (who has chosen to remain unnamed), Flanagan was acting weird right before the incident: "I talked to him outside minutes before it happened and I knew something was going to go down. He was like a fu&*ing lunatic outside... Next thing I know he's in the VIP area stabbing people!"

Here is what the folks from Bowery Boogie saw:

"We were watching the hardcore show at Webster Hall – featuring Sick of it All, Cro Mags, and VOD – when all hell broke loose upstairs. Harley Flanagan, founding member of the Cro Mags stumbled into the VIP lounge with a knife. Security mobilized in a hot minute and beat the shit out of him. It took no less than six beefy dudes to control the madness. Blood was everywhere, and bone protruded from his shin.

"Cops quickly appeared and took him away in cuffs. Not before he had already stabbed some dude in the chest (said victim left the scene with a bandage over the wound). Because of the violence the rest of the show was canceled. The remaining bands promised to reschedule the show. To be fair, Webster Hall security contained the situation professionally. Lots of drunken, pissed off hardcore fans were on edge after the cops shut down the show, but the scene was cleared without further incident."

“Someone was yelling, ‘Get his hands, get his hands, he’s got a knife!’ ” witness Dave Gustav said. “Everything went nuts.”

“People started booing him and throwing stuff at him,” eyewitness Justin Brannan said. “His hands were handcuffed but he still gave everyone the finger.”

Here is a detailed description of the events (courtesy of The Daily News):

"He first lunged at one of the men and slashed him twice in the side, the sources said. As the second victim tried to break up the fight, Flanagan bit him and slashed him near his right eye.

"Flanagan then turned back to the first victim and cut him again in the right arm and bit him in the left forearm. Both men were taken to a hospital with nonlife-threatening injuries.

"Flanagan, who played bass with the band, was charged with second-degree assault and criminal possession of a weapon, cops said. A 4- to 5-inch knife was recovered at the scene." 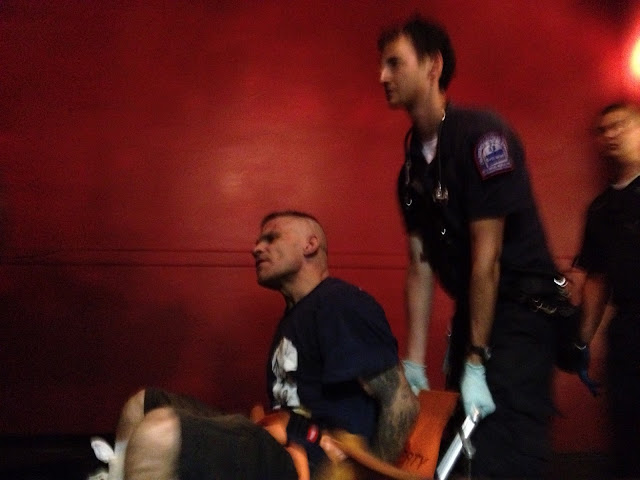 Who Were The Victims?

According to the NY Post, William Berario, 45, was slashed above the eye and bitten on his cheek. Michael "The Gook" Couls, 33 (current CRO MAGS bassist & member of the DMS crew) was cut on his arm and stomach.

Both members of CRO MAGS were taken to Bellevue Hospital with non life-threatening wounds.

Flanagan, suffered a broken leg by the time security finally pinned him down, witnesses said. Cops handcuffed him to a chair and took him out and also brought him to the hospital. He was hit with two counts of 2nd degree assault and weapons charges.

Why Did It Happen?

The attack was allegedly sparked by Flanagan's request to play on stage during the CRO MAGS set being denied, as well as him being under a high level of stress due to his recent divorce. It is believed that his intention was to injure the current bass player to force the CRO MAGS to need him to play bass. In his possession at the time of his arrest was a VIP laminate from the CBGB festival, which had granted him access to the VIP area where the attack occurred. He received the laminate because he was a panelist at the CBGB festival on the previous day.

Reportedly, the CRO MAGS camp had warned the Webster Hall staff about Flanagan's presence at the show and asked them to not allow him inside the venue. Once inside, allegedly Flanagan was being served pitchers of beer inside the VIP area (located upstairs at the venue).

"You can all thank Harley Flanagan for ruining the night for everyone," CRO MAGS lead singer John Joseph McGowan told the crowd.

Note from the club: First off, we don’t sell pitchers of beer or anything in pitchers for that matter. We were on the lookout for him, all the security guards at the front + guestlist people + cashier were shown pictures of Harley (we were only alerted to this issue 2 hours after doors) and we do not know if he was already in by that time or not, but the pictures online are old and don’t really look how he looked on Friday. The security guards upfront were given his full name to look for when checking IDs, as well as the cashier and guestlist people. We do not believe he had an alcohol wristband on, and he did have 3 CBGB VIP laminates on him (which is how he got into the VIP area in the first place), so he likely came in said “I’m not drinking “ (to avoid getting ID’d) and flashed his badge. We saw him (as well as most of the incident) and he did not look close to the pictures anymore.