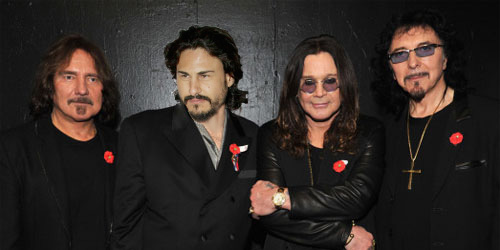 BLACK SABBATH will be releasing their comeback record entitled '13' on June 10 via Vertigo (album artwork & details HERE). Talk about beating all odds! Not only was the record produced in the midst of Tony Iommi's ongoing cancer treatment, but they also lost their legendary drummer Bill Ward because of contractual issues.

Members of the band were recently interviewed for a cover story in the July 2013 issue of Guitar World magazine. During the interview, Iommi talked about having to replace Bill Ward with Brad Wilk (RAGE AGAINST THE MACHINE, AUDIOSLAVE).

Iommi on Bill Ward's complains about the financial terms presented by the band: "I was shocked. We were hearing stuff from lawyers, like, 'I'm not happy with this. I'm not happy with that.' We waited a long time for Bill and we wanted to sort it out. But at the end of the day, especially after I was diagnosed, I thought, Fucking hell, that's it. We've got to get a move on. I might pop off next year! So I emailed him and said, 'Bill, we can't wait any longer. We've got to get on with it.' And that was it."

On having Brad Wilk record drums on '13':

Iommi: "We had our doubts, because they play a different, funky sort of music. But after a few days of rehearsal, we knew [producer] Rick [Rubin] was right. Brad was a really good player, and he was getting it. We liked his style and the way he tried different things instead of being regimented. It was sort of jazzy and loose, like Bill."

In other SABBATH news, last week, the band performed a NEW song from '13' on the season finale of CSI: Crime Scene Investigation. Check it out HERE!

Be the first to get information about the new Black Sabbath album: http://bitly.com/BlackSabbathMailingList.

Related links:
BLACK SABBATH's Official Website
Brought to you by HornsUpRocks.com at 12:43 PM