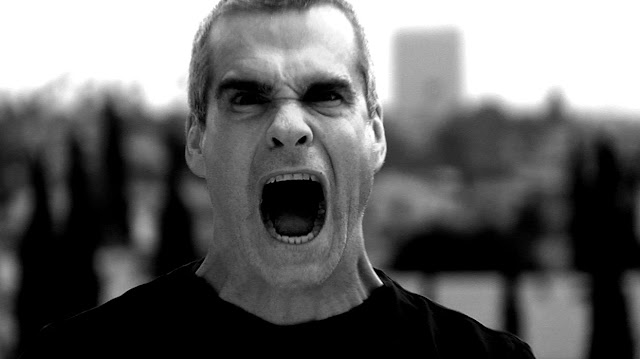 You are a man of many talents – actor, author, musician, activist, journalist, TV host. Is there anything that you don’t do?

Sleep or enjoy moments of solitude and tranquility. I’m not exactly ambitious as much as I have a very good realization of what I am and what I am capable of. I come from the minimum wage working world of the late 70’s, early 80’s and I have a high school diploma – so it’s not like you’re asking me to split an atom or get to the moon quickly.

I am a crass opportunist as much as anything else – in that when someone says, “Hey you want to be in my movie?” I’m like “Yeah, I can’t act so I’m definitely showing up.” I just do stuff and realizing guys like me – I would probably had a life of flipping burgers had I not been very lucky so I remain grateful and kind of running at it at the balls of my feet even 30 years in.

Henry Rollins today is more sophisticated than the 20 year old kid who joined Black Flag in 1981. How has maturity affected the way you’re inspired by heavy music?

Well I’ve always liked heavy music because it was as angry and as passionate as I was. That’s why a lot of us like metal music and heavy music because your heart beats heavy, you have big feelings and big emotions so you take things hard. You win and lose at love and life and you need some kind of soundtrack that hits as hard as you’re hitting life and life is hitting you, hence 80,000 people at the Wacken festival every year, hence the success of all these metal bands and why metal and heavy music is never, ever going to die.

It’s never going to be old, not to me at least and not to millions of other people because we live life in a very full contact way and so that aspect of my life hasn’t changed at all – things still hurt and you try your best and you fail, so you put on a High on Fire record and life gets better. I like music that’s not breaking walls down as well, you have to be eclectic and there’s lots of good music out there – Bob Dylan with an acoustic guitar also works.

I’ve become more mature in the years just because I’m 51, not 20 and I’ve had a lot of laughs from the trek, seen a lot of people die and been to a lot of countries and seen a lot of ups and downs . That kind of exposure to the world, it broadens you – especially all the loss in life, the defeat. If you’re smart enough to learn from it, good lessons and it has made me a more humble person.

Read the rest of the interview HERE!

Make sure you listen to Full Metal Jackie HERE!

Related links:
Henry Rollins' Official Site
Brought to you by HornsUpRocks.com at 3:41 PM