SUFFOCATION: Making Of The Video Shoot For "As Grace Descends" At Duff's! 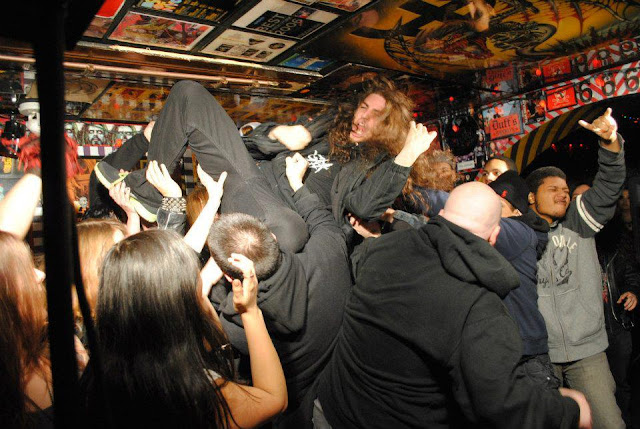 On Saturday, January 5, SUFFOCATION rang in the NEW Year in style! The "Heavy Metal Mecca", Duff's Brooklyn, became the video set for their NEW single "As Grace Descends".

Today (February 7), Nuclear Blast Records has premiered a killer video produced by Tommy Jones from The Studio in New Jersey the showcases the making of the music video for "As Grace Descends". The full length video should premiere very soon, so stay tuned!

Watch our exclusive behind the scenes video HERE!

Don't forget that SUFFO will be hitting the road this weekend for three exclusive East Coast area appearances before their upcoming release of 'Pinnacle Of Bedlam' (set for February 19 in North America via Nuclear Blast Records).

GET YOUR TICKETS NOW AND CATCH SUFFOCATION LIVE!

SUFFOCATION's NEW album 'Pinnacle of Bedlam' is available for PRE-ORDER now in North America at this link:

Related links:
Suffocation's Official Site
Brought to you by HornsUpRocks.com at 4:39 PM