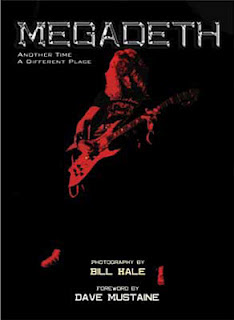 "Megadeth: Another Time, A Different Place" gives the audience a front-row seat into the early days and meteoric rise of this young band who would become one of the most influential groups of all time and, with Anthrax, Slayer, and Metallica, consistently touted among the best “Thrash Metal” bands ever to cross the stage. This is the first Megadeth photography book and only the second book documenting their rise to Rock glory, including rare, never-before-seen photographs representing a small but crucial period of time in their career. Hale’s photographs, from intimate backstage photographs to screaming, kinetic live shots, are the images of a young band prepared to take on the world.

Contest 1 (HornsUpRocks.com): Go to the comments section below and tell us your MEGADETH story. The most creative entry wins a copy of the book. *

Contest 3 (Twitter): In one short Twit tell us what MEGADETH means to you! The most creative twit, wins a copy of the book. Our Twitter handle is @HornsUpRocks, please hashtag #MegadethBook *

“The ‘work’ that you hold in your hands now is the work of a friend, who is also a ‘photo-grrrrrrr-apher,’ and who has captured the very essence of my career: hungry, gritty, hard, cold, impersonal, personal, and very personal. Also, the sensitive unseen side of me, which was somewhat of an anomaly with the public and left me an enigma to my peers.” — Dave Mustaine from the Foreword 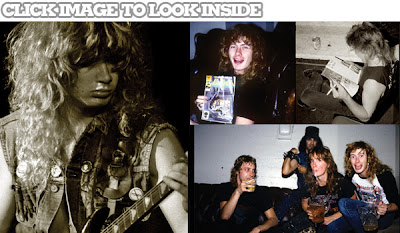 11 at PNC Bank Arts Center in Holmdel, NJ
12 at Toyota Pavilion in Scranton, PA
16 at Stage AE in Pittsburgh, PA
18 at The Deltaplex in Grand Rapids, MI
20 at Rock On The Range in Columbus, OH
22 at La Crosse Center in La Crosse, WI
24 at Tyson Center in Sioux City, IA
25 at Hartman Arena in Wichita, KS
26 at Rocklahoma in Pryor, OK

More dates to be announced. 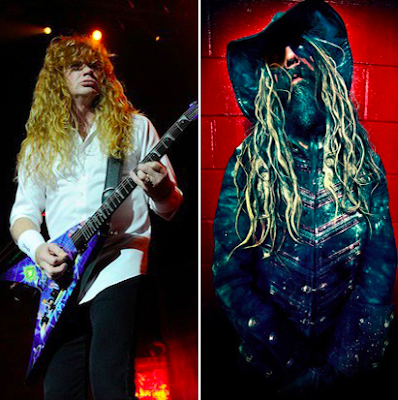 Related links:
Click here to purchase "Megadeth: Another Time, A Different Place"!
Megadeth's Official Site
Megadeth on Facebook
Megadeth on Twitter
Brought to you by HornsUpRocks.com at 12:03 PM

Megadeath is the reason in married! The first time I saw my husband was at a megadeath show in clifton park-I won a meet meet and greet after the show but didn't get the email- if I had maybe I wouldn't have met Brian. Instead his friend hit on me at a gas station and he ran into a candy rack trying to check me out. And the rest is history :) - Kari

I, a life-long arachnophobe, was humming "Sleepwalker" to myself and rummaging through a pile of laundry when a spider emerged. At first, I thought there was a chance that it could have been some cat hair (it was summer), but after studying it, I saw that it definitely was a spider. I continued humming to myself and took a sheet of paper, placed it on top of the spider, and smashed it with my hand.

Then a few weeks later, I was getting ready for a shower, and there was a spider on the wall in my shower. I immediately backed away, but then started humming the intro to "My Last Words" to myself, and I calmly took a flip-flop out of my living room and smashed the spider. I even used the shower after getting rid of the spider, which is no small feat for someone as seriously arachnophobic as I was!