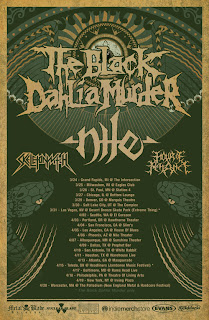 Ohio headbangers SKELETONWITCH -- whose latest album, 'Forever Abomination', cracked the Billboard Top 200, as well as Decibel's Top 40 of 2011 -- will return to the road this week. After a warm-up show in Cleveland on Friday, the band will join forces with The Black Dahlia Murder, Nile and labelmates Hour Of Penance for a four-week tour that concludes at the New England Metal And Hardcore Festival. This marks the group's first North American touring action of 2012.

In other SKELETONWITCH news, the final color variant of the forthcoming Breathing The Fire vinyl reissue -- which, unlike the sold-out initial pressings of the album, comes in a gatefold Stoughton "tip-on" jacket -- has arrived at Prosthetic's warehouse. Check out a picture of the two-color, half-and-half LP, which is limited to 125 copies below. 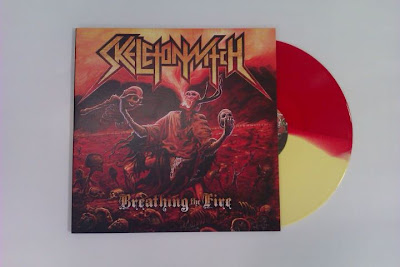 180-gram black and standard-weight "fire splatter" wax are also available. The former will arrive in select retail stores on April 10; the latter and the half-and-half LP can both be pre-ordered at the PROSTHETIC STORE. LP reissues of the band's 2007 breakthrough, 'Beyond The Permafrost' -- which will also be available in three color variants ("Permafrost splatter," half-and-half and 180-gram black vinyl) -- are still in production, but can also be pre-ordered now at the Prosthetic Store.

Over the last five years, SKELETONWITCH has toured alongside a who's who of Heavy Metal, from icons like Danzig, Ozzy Osbourne and Rob Halford, to international titans Amon Amarth, Arch Enemy and Dimmu Borgir, to American powerhouses High On Fire, GWAR and Devildriver. 'Forever Abomination', the group's third Prosthetic release, was produced by Matt Hyde (Slayer, Children of Bodom).

Related links:
Skeletonwitch on MySpace
TBDM on MySpace
NILE's Official Site
Official Site Of Hour Of Penance
Brought to you by HornsUpRocks.com at 4:29 PM