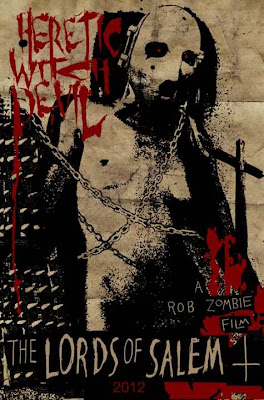 Zombie's latest film, 'The Lords of Salem', is currently in the final stages of post-production and promises to be Zombie's most insane film yet. "I am enjoying taking my time finishing this film. I hate rushing things at this stage of the process, so it is a luxury to take it slow and really fine-tune every part of the production", stated Zombie. No release date is set yet for the film.

Zombie recently told The Aquarian Weekly that "The Lords Of Salem" is "a different movie for me. I hate calling it a horror movie because it's more than that. It's very much like a psychological terror film, and it's a very different style. The other films were very in-your-face violent. This is more like a total mindfuck movie, and it's just very different, but I'm very excited about it because the fans of what I've done will love it, but it's a very different trip than I've tried before because I didn't want to just go and do the same thing again — and after doing two 'Halloween' films in a row, I wanted to break the mold of anything like that — but very, very different."

Filmsynopsis: "A mysterious wooden box containing a vinyl record arrives for Heidi, a gift of the Lords. She assumes it's a rock band on a mission to spread to spread their word. As Heidi and Whitey play the Lord's record, it starts to play backwards, and Heidi experiences a flashback to a past trauma. Later, Whitey plays the Lord's record, dubbing them the Lords of Salem, and to his surprise, the record plays normally and is a massive hit with his listeners. The arrival of another wooden box from the Lords presents the Big H team with free tickets, posters and records to host a gig in Salem. Soon, Heidi and her cohorts are far from the rock spectacle they're expecting. The original Lords or Salem are returning and they're out for blood."

Remaining tour dates for the Rob Zombie/Megadeth U.S. tour are as follows: