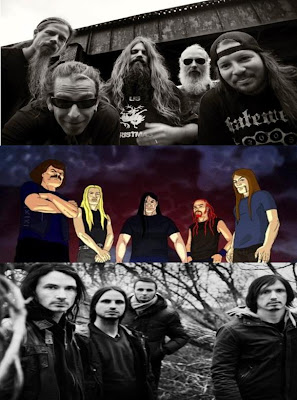 This summer, two of the biggest names in Metal, LAMB OF GOD and DETHKLOK, will join forces for a 34-show North American tour kicking off on August 1 in Seattle, Washington. The three-time Grammy® Award-nominated band from Richmond, VA and the world’s most brutal animated death band from Adult Swim’s "Metalocalypse" animated series will shred their way through cities throughout in the U.S. and Canada ending September 15 in San Francisco, CA.

The upcoming DETHKLOK and LAMB OF GOD with GOJIRA summer tour marks the return of LAMB OF GOD to North American stages where they will support their latest album 'Resolution', which debuted at #3 on the Billboard Top 200 Albums chart when it was released earlier this year. As in tours past, Brendon Small, the co-creator and composer behind DETHKLOK, will bring the animated band to life on stage each night alongside an all-star band including the legendary Gene Hoglan, Bryan Beller and Mike Keneally. Building on the success of 'Dethklok: The Dethalbum' and 'Dethklok: The Dethalbum II' from Williams Street Records, Small is currently in the studio working on the band’s third album release scheduled for later this year. Additionally, NEW episodes from the fourth season of "Metalocalypse" currently air on Adult Swim Sundays at 12:15 a.m. (ET/PT).

Joining the co-headliners at each stop along the tour will be special guest GOJIRA, the French Metal band that will perform songs from its upcoming album release, 'L'Enfant Sauvage', which will be released in the U.S. on June 26 with Roadrunner Records. Pitchfork describes the NEW album as "breathless and awesome."

Tickets to the DETHKLOK and LAMB OF GOD with GOJIRA tour will go on sale beginning Friday, May 18 and will include the following stops:


*Schedule is subject to change.