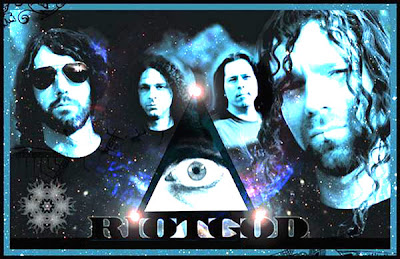 Riotgod's sophomore album 'Invisible Empire' will be released in a little over three weeks via Metalville Records. In conjunction with the album's release, Riotgod has just confirmed a string of North American tour dates which can be found below.

Riotgod began in spirit through the conversations of Monster Magnet's Bob Pantella and Jim Baglino while out on tour as early as 2006.

While touring with Monster Magnet provided them with some great times and afforded them the opportunity to perform around the world, each communicated a desire to express their own musical ideas.

During their time off the road, the pair began exploring the possibilities of creating their own band . Bob began to lay down some ideas to get the ball rolling come 2007.

Bob while recording ideas that would become many of the songs on Riotgod's first CD, also sought out musicians that would fill out the guitar and vocal slots for the then nameless band. Contacted first was Garrett Sweeny for guitar.

For the vocals, many possible names had been discussed, including some notable voices familiar via other established bands yet in the end the local New Jersey connection would lead to Mark Sunshine.

Riotgod did its first mini-tour in 2009, hitting the road with fellow New Jersey rockers The Friends of Bill Wilson. Riotgod would visit the US mid-west and Canada, playing venues such as Chicago's Double Door, Detroit's Blondies, Toronto's Bovine Sex Club as well as some lesser known colorful establishments along the way.

Gun Shy Assassin is hosting an exclusive stream of the track "Crossfade" HERE.

The Obelisk is streaming the track "Fool" HERE.

The album is available for pre-order HERE.

Related links:
Official Site of Riotgod
Riotgod on Facebook
Metalville Records
Decibel Magazine
Brought to you by HornsUpRocks.com at 8:47 PM