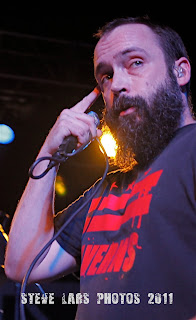 When Clutch was ignited in 1991, they had no set agenda or a long-term plan as in what they wanted to accomplish musically. All they knew is that if they wanted to keep themselves from having to get "regular jobs", they would have to dedicate their entire lives to their music and tour, tour, tour. They also realized that in order for them to prevail, they would have to create memorable rocking songs.

It took Clutch a lot of hard work and patience to fine tune their signature sound, and it was actually a lucky mistake that changed the bands sound forever. When the band was formed, current vocalist/guitarist Neil Fallon was a backup singer. It turns out that one day the original singer didn't show up to a gig, so Neil stepped on stage and took over the front-man slot. The band immediately knew he was the missing ingredient to establish Clutch's sound.

On Friday, December 30th, Clutch performed in front of a sold-out audience at the Starland Ballroom in Sayreville, New Jersey. Joining the Kings of Modern Rock, were Corrosion Of Conformity and Kyng. The hungry crowd of Rock N' Roll children celebrated the conclusion of the holiday season and the ringing of the new year, by grooving to the phenomenal rocking sounds that all three bands cranked up for their fans ears to indulge in.

Before Clutch's rocking set, we had the chance to chat with Clutch's front-man Neil Fallon. During the interview we discussed the bands plans for 2012 and we even touched upon his musical career. Fallon even shared some useful tips for fellow musicians. Sit back, grab a cold one, and crank it up!

Related links:
Clutch
Brought to you by HornsUpRocks.com at 12:03 PM