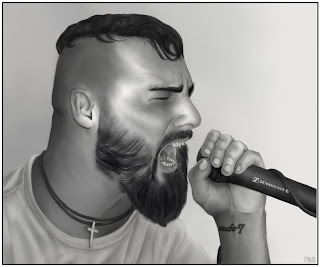 The Empire Shall Fall recently unleashed their sophomore EP entitled 'Volume 1: Solar Plexus' and the response has been massive. This is the first installment of a 3 part project they have been working on constantly in order to keep feeding their hungry fans some NEW music as often as possible. The band recently debuted their NEW EP via a hometown show in Brooklyn, New York. While the band has always possessed immense talent, at this show the band made it evident that their sonic approach has matured and they are not afraid of trying NEW things.

If one had to point fingers at who is responsible for TESF's musical direction, all fingers would be pointed at vocalist/lyricist Jesse Leach. Regardless of which band he is with, Leach always brings with him a bag full of tricks that are ever-changing. His energy on stage is addicting, and his vocal projection is always on point. He really makes you wonder how the hell does he do it?

Before The Empire Shall Fall took center stage at Saint Vitus Bar in Brooklyn, we had the chance to chat with Leach about TESF's NEW EP entitled "Volume 1: Solar Plexus". During the interview he also discussed his musical agenda for 2012, and the possibility of rejoining Killswitch Engage. Without further due, here is our EXCLUSIVE interview with Jesse Leach!

You can listen to "Volume 1: Solar Plexus" it now at the link below, your ears will thank you forever!

- January 13th at the Fete, in Providence RI
- January 14th at the Great Scott, in Boston, MA