NYHC Legends Biohazard Team Up With Revolver Magazine + Repudo To Give Away NEW Record 'Reborn In Defiance'! 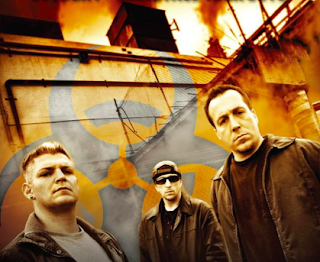 New York Hardcore veterans Biohazard are teaming up with Revolver Magazine and Repudo to blaze yet another trail and give away their new record "Reborn In Defiance" in its entirety for FREE to all fans in the United States starting January 20th 2012.

The first such promotion ever launched, the record will be available for free download off of Revolver Magazine’s website as well as through the technology offered by Repudo. Fans can check into Biohazard "Containment Zones" (record stores, venues, and more) across the United States using the Repudo app on their smart phones and download the NEW record directly to their phones or send it to their email inbox. A full map of the "Containment Zones" will be available soon. For fans who still want a physical copy of 'Reborn In Defiance', CDs will be made available for sale in conjunction with Record Store Day in April and will include
exclusive additional content.

"When we started, we followed our hearts and innovated a new direction for
Heavy Music, and today we're doing the same.” says Biohazard vocalist/guitarist Billy Graziadei. “Technology has allowed us to find a new way to not only reach out to fans but also to thank them for their support all these years. Grab our album for free and we'll see you on tour!"

'Reborn In Defiance' is the highly anticipated NEW record that was recorded by the band's original lineup, its first such recording in almost 18 years, with producer Toby Wright (Alice in Chains, Metallica).

Below are all upcoming northeast tour dates for the first part of their 'Reborn In Defiance' world tour. Scott Roberts will be joining the band as bass player for all dates. Biohazard has sold millions of albums worldwide since they achieved international success with their albums 'Urban Discipline' on Roadrunner Records in 1992 and 1994’s 'State of the World Address' on Warner Brothers.

Over the years, Biohazard has collaborated with Onyx, Cypress Hill, Agnostic Front, Hatebreed, Pantera, and Type O Negative, among others. The band has continued to tour nationally and internationally, sharing stages with House of Pain, Ozzy Osbourne, Slayer, Danzig, Fear Factory, Sepultura and Agnostic Front.

Related links:
Revolver Magazine.com
Repudo.com
Biohazard
Biohazard on Facebook
Biohazard on Twitter
Brought to you by HornsUpRocks.com at 11:57 AM