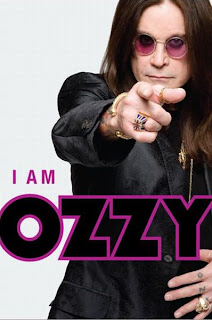 On a cold winter day, as I am rushing down the escalators at Grand Central Station, on my way to work. I notice that Ozzy Osbourne is on the cover of the "Metro" newspaper. I didn't think twice about grabbing it. Then I realize that Ozzy was having a book signing session at the Border's next to my office that same night! I get in touch with a few friends, but they can't make it. Towards the end of the day, my friend says that he will also be there! Around 7 pm, we meet at the Time Warner Center and proceeded to stand in line for almost 2 hours. Let me tell you that the only person I would stand in a line for is Ozzy. I mean, he is Ozzy fucking Osbourne! And now I have a signed copy of his amazing book, that I will surely give to my 9 year old kid when she is A LOT older!

Here are some thoughts about why everyone should read "I Am Ozzy":

Ozzy Osbourne might be the most misunderstood rock n' roller there is. While many see him as the Prince of Darkness. The reality is that Ozzy is a humble, down to earth sweet guy. Has he mellowed with age? Maybe. Has he matured after so many years of clowning around? Perhaps. Has Ozzy created a legacy for himself, his family, his band members and his fans? Absolutely.

If you have any doubt that Ozzy is the most honest rock star alive. You are in the wrong. With the release of his autobiography on January 25th, Ozzy opens up to his fans like he never has before. He discusses his childhood, the birth and demise of Black Sabbath, his solo career, his family, his troubled years of addiction, his triumphs, his defeats and yes The Osbournes.

While reading the book, I found myself putting the book down and laughing hysterically at Ozzy's tales. I also decided to truly enjoy the book and not rush through it, I also didn't want to finish the book. That is how good the book is, it keeps you hooked and very entertained, page after page.

What really matters is that Ozzy has stories that are worth for anybody to read. Some of you may think that a book having to do with Ozzy must be a complete disaster. Again, you probably misunderstand what Ozzy is all about. It doesn't get any more real than Ozzy. "I Am Ozzy" a truly inspiring autobiography, by a man who has shaped up Hard Rock forever!

What's next for Ozzy? A brand new album that should be released sometime in June that is suppose to be a heavy ensemble! For more information visit: www.ozzy.com

Here is a crappy (who cares? It's Ozzy!) cellphone picture of the "Prince of Darkness": 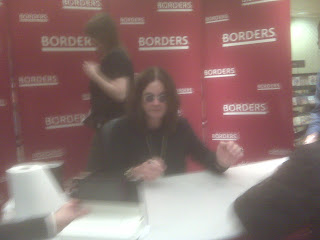 Have you seen this fantastic Ozzy video?

Brought to you by HornsUpRocks.com at 12:04 AM No comments: