Today is the release date of Pantera's Cowboys From Hell 20th Anniversary Edition. In order to celebrate this day, Pantera's vocalist Philip Anselmo got online and chatted with fans worldwide via Ustream. During the chat Philip looked healthy, strong and was very eloquent with all of his answers. As usual, he was very honest and comical. When asked what his recipe for looking younger and younger is, he jokingly said: "next thing you know, I will be back in an egg. My mother used to call me a hatch." Since we know not everyone was able to tune in, here is a rundown of what went down during Anselmo's chat with Pantera's fans. Uncensored and real, just like the way it should be! 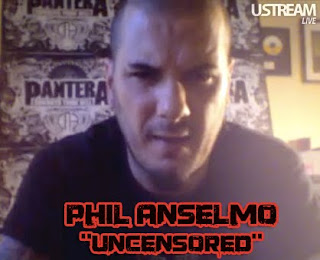 Why did you decide to become part of a Heavy Metal band?

There is no energy like the Heavy Metal energy!

What is your favorite track from Cowboys From Hell?

Philip Anselmo: It has to be Primal Concrete Sledge! It is a brutal song that came out of nowhere. We where in between takes while recording Cowboys From Hell, and Vince started playing this beat that made all of us lose our minds. Dimebag started playing this crazy guitar part, I started scribbling some lyrics. And next thing you know we had a whole song. It was magic!

How does it feel to have been part of Pantera?

It was a full way split when the four of us would get in a room and jam. All of us! The only way to describe it is: "Modulistic terror, a vast sadistic feast, the only way to exit, is going piece by piece." (SLAYER lyric from Piece by Piece)

How was the lyrical process during Cowboys From Hell?

It was up to me to make sure the lyrics fit into the song. But I would be open to the bands opinions, and sometimes we even voted to see if a lyric was right for a particular song. Specially during Cowboys From Hell.

What was your personal inspiration and motivation to switching gears into a more ass shredding sound?

Gradual but honest things. When I joined Pantera, we made it be known that we were going for a more aggressive sound. The thing is that at the time we had a war with the clubs. If you wanted to be part of the club scene, they made you dress with Spandex like Motley Crue since that was popular in the 80's. But that did not last long.

Where you aware that this album would change Heavy Metal forever?

No Way! We knew we were great, but we had a lot to prove. Cowboys From Hell was our introduction to the world. We had to prove ourselves every night, show after show.

During that time, which vocalists influenced your vocal style?

I found a lot of beauty in Thrash metal vocalists like Paul Ballof from Exodus and Dark Angel's Don Doty.

What inspired the lyrics from Cemetery Gates?

There was a friend who had died in NOLA and it had a real heavy impact within my group of friends. When I wrote the lyrics I did not want them to be too personal, because that can be cheesy. I also had to make sure that the lyrics would not take away from the song, because that was one of our best songs.

What are your top five songs of all time?

Man, that is a fucking hard question! But if I have to pick five songs, they are: At Dawn They Sleep by Slayer, The Battle of
Evermore by Led Zeppelin, Drowning Man by U2, Blind by Swans, Painted Black by the Rolling Stones, A Day in the Life by The Beatles, and I got one more, The Prophet Song by Queen.

What is your favorite Dimebag solo from Cowboys From Hell?

It has to be The Sleep! It is a ripping solo, with so much feel, it is a great song!

What is your favorite Black Sabbath album?

That is another tough question, I feel like two lovers feeling like a fool. I have to go with Sabotage and you cannot forget Paranoid!

What song gives you goose-bumps?

David Bowie's Wild Is the Wind. 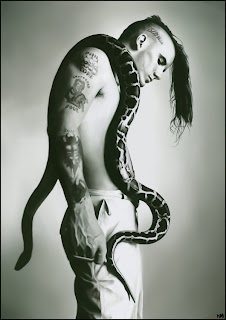 What is your most meaningful tattoo?

When in doubt, always go with the first! The old PHIL CORE.

Which artists were your main influences when writing lyrics for Pantera?

Definitely Van Halen, some Judas Priest, and even Metallica and Slayer. Metallica made the breakthrough for Thrash Metal bands, but Slayer killed me! Without Slayer I would be a differrent man today!

If you would be 18 years old today, would you try to make it in the music business?

Of course! But its not about making it, it is all in your head. When Far Beyond Driven went number one on Billboard, I was overwhelmed. But also underwhelmed. It is a great honor, but making it is all a state of mind. Put in the work by practicing, spending time in the studio, and definitely get on that fucking stage!

What can you tell us about your upcoming autobiography? Would say it is a cautionary tale? Why should people read Phil Anselmo's story?

It is a cautionary tale about an interesting journey, with certain stories that nobody has heard before. You will understand me better if you read it. When you write a book it is a self examination. When you start getting old, you will see how much you learn from when you were younger. It will not be your average rock autobiography!

What was your first concert?

When I was young I would go see local acts. But my first big show was KISS in the 6th grade, a good friend of my family who was Kiss's tour manager took me. Around that time I also saw Jethro Tull, and I even OZZY with a shaved head and a wig on! INSANE!

Did you ever experience stage freight?

When I was a kid I was always the youngest in the bands I played in, so there was some apprehension. With Pantera we had to work our way up. Being in the Cowboys From Hell tour taught us a lot. We had to build our ground. Once you have that microphone on your hand, you simply melt the stage freight away! 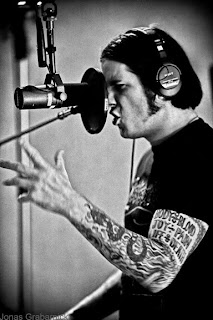 Which of your songs is the hardest song to sing?

It has to be The Great Southern Trendkill! I had no time to breath on that one, since I had to fill in all the gaps. I learned my lesson hard on that one.

What are your favorite memories of the Cowboys From Hell tour?

Hanging out with Suicidal Tendencies and Exodus was mayhem every night! The funniest story was when Dimebag ruffled Yngwie Malmsteen's feathers. It was hilarious, everyone was inhebriated. They wanted to kick his ass!

How was it to reach Platinum status with Pantera?

It was a great achievement! Very unexpected. I am a pessimist when it comes to getting something good with my music because the music industry is very rough!

How did you end up doing guest vocals on Vision of Disorder's Imprint?

I toured with Tim Williams from VOD, and I became friends with the band when they would come see us in New York. They asked me to do it, so I did! VOD DAMN! I hope they are doing good, they are great guys.

What are your favorite boxers?

What was your first gig ever?

Speaking of stage freight. I was terrified! It was in NOLA at an all ages show. I was wearing Jeans, a Van Halen t-shirt, and a bandana on my neck. Once I gripped that microphone stand, I did not let go! I plugged my microphone into a guitar FX pedal. Then at the end of the a Black Sabbath song we were covering, I hit the guitar pedal. It was horrific!

What band did you want to play in, but couldn’t? 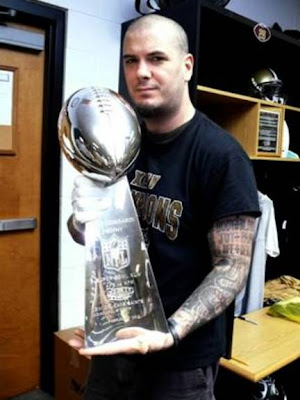 What is your favorite NFL team?

Please! I was born and raised in New Orleans, Louisiana! So my team has always been the New Orleans SAINTS. I would stand in front of the TV as a toddler and watched them lose all the time! But now look at this t-shirt (shows Saints championship t-shirt), world champions! And we are looking good this year too.

What message do you have for your fans?

I love you all! Celebrate this special day! Just have an awesome time! Be happy, be strong!!! I love you all!!! This is Philip Anselmo signing off!

IMPRINTED by Jo Schüftan (Founder of Horns Up Rocks)
Brought to you by HornsUpRocks.com at 7:59 PM No comments: On Friday September 10th, we experienced history in the making at the Official Pantera 20th Anniversary Edition release party at Duff's Brooklyn. It was like being at a Pantera show in the mid 90's. People were losing their minds, losing their voices and losing their sanity song after song. From the moment we arrived Pantera's Cowboys From Hell was blasting on the PA and we ran into many Pantera fans from all over the tri-state area. Once the first beer was in hand, it was all about Pantera's legacy. The legacy that was established thanks to the bands passion and the well crafted music that Pantera created throughout their tremendous career. 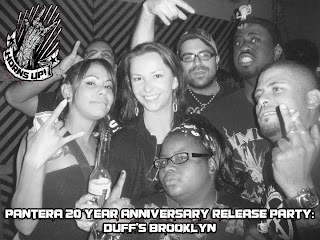 Cowboys From Hell was released on July 24, 1990, and it was Pantera's 5th studio album. After many years of trial and error, Pantera was signed by Atco Records after the band found their sound, their image and the right moment to bring Heavy Metal back to the surface. Produced, engineered and mixed by Terry Date and Pantera, the album is a sonic assault that quickly gets the crowd grooving and headbanging. This is exactly what happened at Duff's Brooklyn!

There was definitely something in the air that night, a vibe that brought people together in unity. It reminded us of when Pantera played in 1991 at the Monsters of Rock festival in Russia, in front of 1.6 million people. That day Pantera shared the stage with Metallica, AC/DC and Aerosmith in what is considered one of the largest music festivals in history. Pantera outperformed every single band that day and made a statement that they were ready to rise the flag of Metal for many years to come.

Today the impact of Cowboys From Hell is evident throughout the entire Heavy Music scene, there is no artists or fan that doesn't own this classic record. If you ask anyone to choose their favorite song, they will have a hard time picking just one song. Cowboys From Hell is one the best records of all time, and 20 years later it is as relevant as it when it was released. We want to thank the Duff's crew for inviting us to cover the event and all the Pantera fans worldwide.

Here is a promotional clip we produced for the Pantera 20 Year Anniversary Edition, and it features footage from the party at Duff's Brooklyn. ENJOY! \m/ 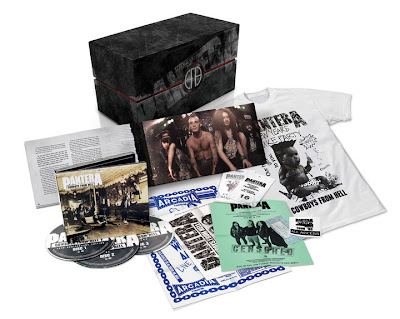 IMPRINTED by Jo Schüftan (Founder of Horns Up Rocks)
Brought to you by HornsUpRocks.com at 3:10 PM No comments: