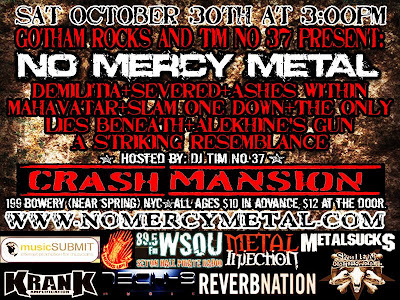 On October 30th, the 4th edition of the No Mercy Metal Showcase will take place at CRASH MANSION. As sponsors of this event, we make it a point to help promote the show and most importantly be at the show to be able to tell you about it. The lineup this time around will make it a memorable day. Additionally, Tim Martinez (A.K.A. DJ Tim 37) will be hosting and spinning the wheels of steel in between sets.

Bands include: Severed, Demilitia, Ashes Within, Mahavatar, The Only, Slam One Down, Lies Beneath, Alekhine's Gun, A striking Resemblance and more!

Wait, there is more!

Since the show will happen on Halloween weekend, we joined forces with the Tri-state Heavy Metal Headbangers Group, to bring you the "No Mercy Metal Helloween Costume Party"! There will be a big prize for the person with the best costume!

Here is a promotional video we created, this should make you laugh!

AFTERPARTY at Duff's Brooklyn, where Brazilian actress/model/enterpreneur Jasmin St. Claire will celebrate the release of her book titled "What the Hell was I Thinking?" 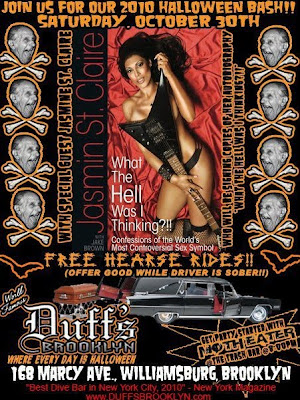 IMPRINTED by Jo Schüftan (Founder of Horns Up Rocks)
Brought to you by HornsUpRocks.com at 11:25 AM 2 comments: 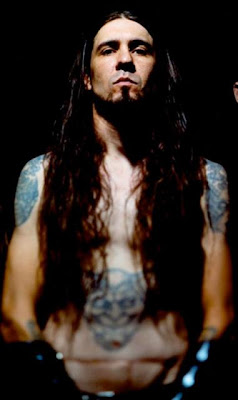 Born and raised in New Orleans Louisiana, Ben Falgoust (born Louis Benjamin Falgoust II) front-man of Goatwhore and Soilent Green is one of the most dedicated artists within the Heavy Metal world. He prides himself in being accessible to the fans, and always melting the kids faces while on stage. One thing that stood out for us recently, is how dedicated Ben is on and off the stage. Not only is he the front-man of Goatwhore and Soilent Green. He also works the merchandise table, and steps in to do the dirty work as a roadie. Why? Simply put, Ben does not take his career as a musician for granted and at present time, times are very hard for musicians.

As a young kid, Ben discovered the passion behind Heavy Music thanks to bands like Agnostic Front, The Vandals, Kreator and Suicidal Tendencies. Being impressed at the impact this artists had on the crowd, he soon decided to start a band. After lots of trial and error, he formed Soilent Green in 1988. Soilent Green's sound is a mixture between Grind Core and Sludge Metal, which makes the band sound very original. In 1997 he decided to start another band, which he called Goatwhore. Goatwhore blends Black Metal with Thrash Metal and the results are very dangerous, definitely not for the weak hearted!

Recently, we had the chance to catch Goatwhore at Club Europa in Brooklyn and once again they proved why the NOLA music scene stands out so strong. As soon as they stepped on stage, Ben and company got the crowd moving and didn't stop doing so until they finished their furious set! And what did Ben do after he stepped off the stage? He went over to the merchandise table to greet fans and sell merchandise. Then, even though he was tired and wanted to get on the road to Goatwhore's next gig. He granted Horns Up Rocks an exclusive interview, which you will all enjoy. The message is very strong and we included some amazing live footage for your ears and eyes to bleed! Enjoy!

IMPRINTED by Jo Schüftan (Founder of Horns Up Rocks)
Brought to you by HornsUpRocks.com at 1:00 PM 1 comment: 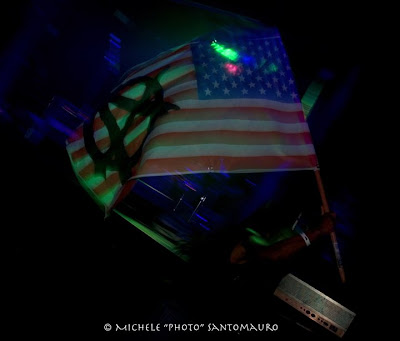 Dead Superstar (one of Long Island's top Hard Rock bands), has a very important message for all of you:

"We would like to thank everyone who tried out for the new lead guitarist slot in Dead Superstar. It was a tough decision for us, but we are happy to announce that Todd Bowes from Westchester, NY will be joining Dead Superstar as lead guitarist. Todd has been in the New York area for over five years, having played with Ex Machina, and Dared the Knot. We are all very excited to begin this new chapter of Dead Superstar, and look forward to seeing you as we begin our next tour promoting the album, Tribulations. Todd's debut will be on November 10th when Dead Superstar shares the stage with POWERMAN 5000 at the Crazy Donkey. Stay tuned for more details."
- Dead Superstar

IMPRINTED by Jo Schüftan (Founder of Horns Up Rocks)
Brought to you by HornsUpRocks.com at 10:14 AM No comments:

Some of you might be familiar with the tremendous work that Built on Respect has done since its inception. Formed by art-culture personality Heidi Minx in 2008, the mission statement of this amazing foundation is: "Treating people with respect, and sewing the seeds of fairness creates solidarity."

As we all know there are a lot of places in the world where people are not treated fairly, but one place which stands out is the Tibetan region. For many years there has been a vast amount of people whose human rights have been completely violated, as a result many fled from Tibet and moved to India. This is what ultimately opened Heidi's eyes and why she decided to take matters into her own hands. In the past she volunteered in Haiti and most recently in India. Her important role as a humanitarian has been recognized by many people, including the Dalai Lama. Heidi singled handily saved a school at a Tibetan community, by teaching kids English and computer skills. What does this have to do with music, fashion and culture? 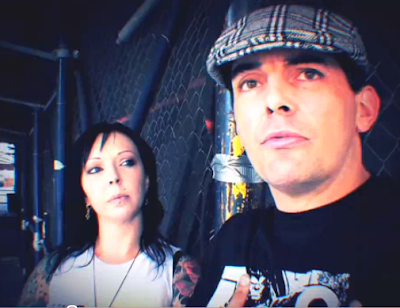 Well, Heidi is also part of the Hardcore production company known as "Black N Blue Productions", who for many years have been working on keeping the identity of Hardcore music intact. One of the philosophies behind Hardcore has been to help one another and stand up against social discrimination. This is why Heidi decided to reach out to different artists and together get the word out about the importance of Built on Respect. Recently, Heidi teamed up with Mike McColgan from Street Dogs who is also the former singer of the Dropkick Murphy's. Here is a video they put together in order to create social awareness about some very important matters.

IMPRINTED by Jo Schüftan (Founder of Horns Up Rocks)
Brought to you by HornsUpRocks.com at 5:33 PM No comments:

Inked America: From Rebels to CEO's 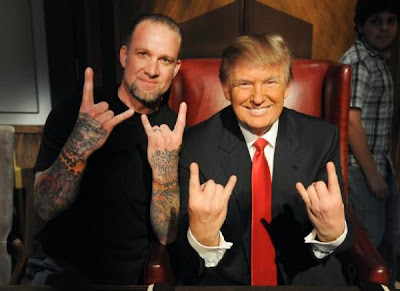 For many generations people with tattoos were perceived as rebels of society, and anyone with a tattoo would get stereotyped as being a low life. By no means is tattoo art accepted by everyone today, but during the last decade it has become more tolerated by society. After covering the "Philadelphia Tattoo Arts" convention, and the "Visionary Tattoo Arts Festival" in Asbury Park, New Jersey. We discovered that not only is tattoo art on the rise as far as the techniques are concerned, but also that "outsiders" are intrigued by tattoo art and its many subcultures.

Unlike any other art-form, in tattoo art the canvas is a person. This makes getting tattooed a very personal moment between the artist and the victim of ink. Getting tattooed is a life changing experience which reflects a persons individuality. The complexity of a tattoo varies according to the actual design and the placement on the body. Nowadays people are going for more extreme tattoos, and we are starting to see more sleeve tattoos and full back pieces. The designs vary according to each persons personality and the meaning behind their tattoos. Some people might get a massive piece and others might get a tiny piece. When getting tattooed the size does not matter, the meaning of the piece of art is what matters the most.

Today, many high level executives have tattoos; some even have full sleeves. Does this mean that tattoo art will become widely accepted within society? Not necessarily. However, tattoo art is on the rise thanks to the role it has in the media and in popular culture.


Today we present to you a mini series called "Inked America: From Rebels to CEO's", we hope you enjoy it!

IMPRINTED by Jo Schüftan (Founder of Horns Up Rocks)
Brought to you by HornsUpRocks.com at 12:04 PM No comments: 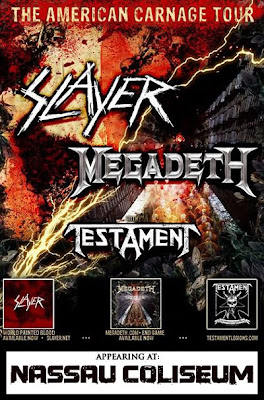 HORNS UP throwers, we have a winner for our SLAYER contest! Mr. Charlie Kosowicz is going to see AMERICAN CARNAGE 2 tomorrow at Nassau Coliseum! CONGRATS & \m/!!! Hit us up at info@hornsuprocks.com to claim your prize! 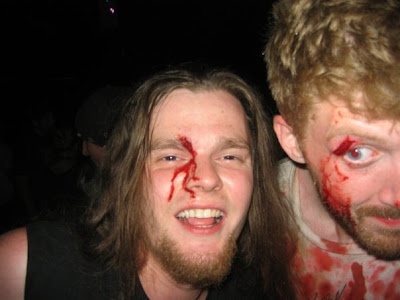 IMPRINTED by Jo Schüftan (Founder of Horns Up Rocks)
Brought to you by HornsUpRocks.com at 9:21 PM No comments: