19 Years of Vulgar Display Of Power 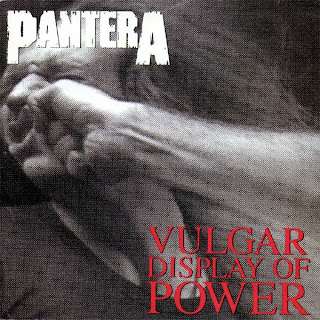 The world was definitely a safer place before Pantera released "Vulgar Display Of Power" on February 25, 1992 through Atco Records. Not only was this album very influential in the 90s within the Heavy Music world, but it is also considered one of the best records in Heavy Metal history. Full of adrenaline and with songs that are more dangerous than giving a loaded gun to an inmate at San Quentin State Prison, Pantera changed Heavy Metal forever when they punched the world in the face with this no holds barred ass kicking record!

Here are some facts about Pantera's "Vulgar Display Of Power":

- According to Q magazine it is one of the "50 Heaviest Albums of All-Time."

- IGN named it the 11th most influential Heavy Metal album of All-Time.

- It has been listed as one of the 1001 Albums You Must Hear Before You Die.

- This is what the media had to say about the album: 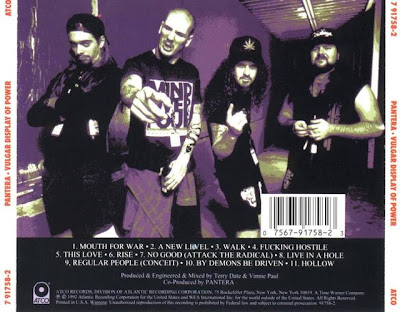 
Related links:
Pantera's Official Site
Pantera on Facebook
Pantera on Twitter
Brought to you by HornsUpRocks.com at 3:10 PM No comments: 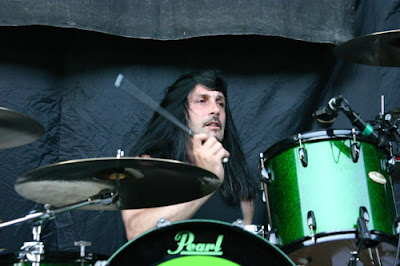 Black Label Society has asked former Type O Negative drummer Johnny Kelly to join the band on their current European tour. After working with Will Hunt from Evanescence on their latest album titled "Order Of The Black", who also went on tour with the band, Kelly was asked to sit behind the throne on the current Black Label Society tour. 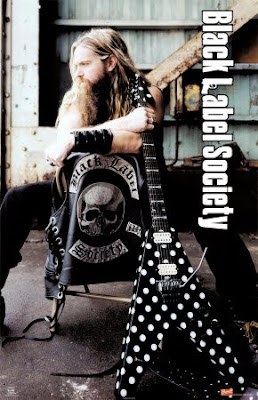 It was always made clear by Hunt that he was not a permanent member: "In the beginning, all I agreed on was that I would do the record, because I thought at this point, I would be busy with Evanescence. But my singer Amy [Lee] decided to really take the time to make the new record as good as possible. So when the option became available for me to tour with Black Label, I jumped at it."

Kelly will make his live debut tonight in Paris, France at "La Cigale". With the experience that he has, the next few tours be a lot of fun for Black Label Society. Here are some facts about Black Label's new drummer Johnny Kelly:

- He is the current drummer for Danzig and is one of the founders of Seventh Void, were he also plays drums.

- Before stepping in as drummer for Type O Negative he was the band's drum tech. 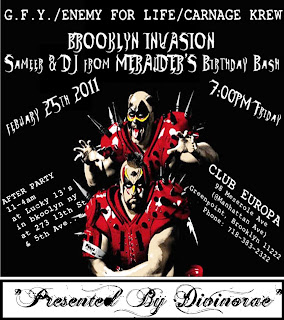 For those who say that Hardcore music is "old" news. we suggest you start thinking twice about such effortless statement and perhaps bite your tongue a little bit. While the whole music industry has changed, and the "game" has become a lot harder to play. The underground Heavy Music scene is finally in the rise once again. Don't believe us? We suggest you start getting out there and explore the scene in depth.

Ever since we started Horns Up Rocks we have come across hundreds of bands, promoters, and fans, that are helping to resurrect the scene. We believe that a big beneficiary of the global economic crisis is the underground Heavy Music scene! Think about it, while there are still a lot of national tours happening, not everyone can afford to go to such tours. And since going to a show is a necessity for any Heavy Music fan, it works beautifully.

In order to celebrate this awesome accomplishment, join New York Hardcorers G.F.Y. as they take over Club Europa in Brooklyn this Friday February 25th, along with Fed Up! and Carnage Krew! Additionally, a few birthdays will be celebrated! And the official after-party at Lucky 13. Here are all the details you need:

Plus HOT chicas selling merchandise, including NEW G.F.Y. Booty Shorts for the Ladies and some dudes?!

Related links:
Click to purchase your tickets now!
Official Facebook invite
G.F.Y.
Fed Up! on MySpace
Carnage Krew
Brought to you by HornsUpRocks.com at 2:29 PM No comments:

A Virus Beyond Heavy 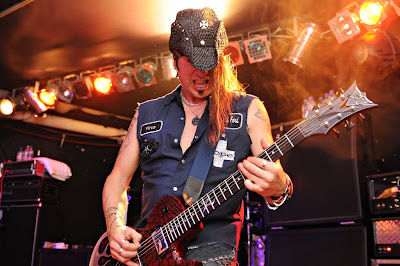 Many of you may know Andre Michel Karkos (A.K.A. Virus) as the lead guitarist from the the American Industrial Heavy Metal/Rock band Dope. While Dope is on hiatus, awaiting for the right time to comeback with a solid record and a world tour. Virus has kept busy taking his career to new levels as musician, as a producer, and as a mentor. We recently had the chance to meet with him and chat about his current endeavors.

In the past few years Virus has stayed busy working as a producer, and was recently involved with the band Prong when he remixed the song "Looking For Them". He is also part of the band that performs on stage on the Broadway hit show Rock Of Ages and will soon join Spiderman, also on Broadway. 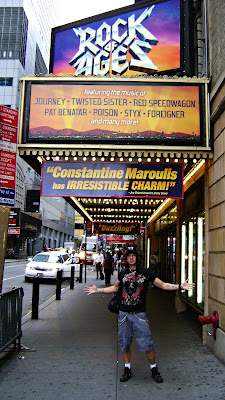 Additionally, Virus is a mentor for young kids who are aspiring to become professional musicians, and is heavily involved in various "Schools of Rock" in the Pennsylvania area. In the past he has arranged field trips with the kids, in which they got to meet Zakk Wylde from Black Label society and learn about what it's like to be on the road on a touring band. 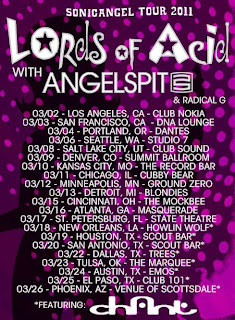 At present time, Virus is getting ready to hit the road as guest guitarist for Belgium's own Lords Of Acid on their upcoming US tour. In case you didn't know, Lords of Acid is a post-Industrial/Acid House/Techno band formed by Praga Khan, who is one of the pioneers of the Rave sounds that lead to the creation of New Beat and Acid House.

Here is an exclusive interview we recently did with Virus, in which he discusses his past, his present, and his future as a professional musician. We want to thank Virus, Tim Martinez (DJ Tim No 37) and Evil Steve! \m/

In the past few years there have been numerous incidents in which human beings have lost their lives after being harassed by some cowards who are too weak to face their own reality and need to feel better by hurting others. This has to stop!

Here in New York City we live in a "melting pot" full of people from all over the world. So to us this is a subject that we don't just hear or read about, but it is something we face daily. This is why New York City is uniting this Saturday February 26th in an event presented by Tim Martinez (A.K.A. DJ Tim No 37). “Hate the Hate” is the name of the event and it will take place at Tammany hall, which is a brand new state of the art facility in the Lower East Side section of Manhattan.

Here is a rundown of what will take place this Saturday, please join the Horns Up Rocks crew and lets make history together!

And like if this wasn’t enough, the creator of the Horns Up Rocks logo Joey James will be raffling off an original piece of artwork as well. Joey has also worked with Type O Negative, Biohazard, OTEP and Duff's Brooklyn.

- When will all this happen? Saturday February 26th (doors at 6 PM)
- Where will it all take place? Tammany Hall (152 Orchard Street, New York NY)
- How much will this cost? $15 (All proceeds will go to The proceeds of this event will go to: The Hetrick-Martin Institute and The Trevor Project.

Here are some videos created in tribute to this amazing event!

Related links:
OFFICIAL Facebook invite
Official Hate the Hate YouTube Channel
Brought to you by HornsUpRocks.com at 3:12 PM No comments:

Hailing from Long Island New York, Dead Superstar is the result of mixing 4 completely different types of musicians and have them create some magic together. While their music has elements of Heavy Metal Music blended with Alternative Music, Dead Superstar make it very hard to pinpoint their musical style. In times when a lot of new bands are settling for a set formula, it is refreshing to listen to a band that has no restrictions when it comes to their music.

Without further due, here is their brand new video for their song "Crossroads":

Stay tuned, tons of national dates about to be announced!!!

Motörhead: The World Is Yours 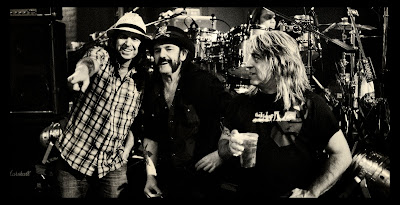 For over thirty-five years Ian Fraser Kilmister (A.K.A. Lemmy Kilmister) has been changing the face of Heavy Metal and has been making it a lot more fun. After a quick stint with Hawkwind, Lemmy realized that he was ready to form his own band and become the emblem of such band. In 1975, Lemmy formed Motörhead and immediately started making his presence be felt by helping to launch the "New Wave of British Heavy Metal"!

In the early 80's Motörhead had several singles in the UK Top 40 chart. Their albums "Overkill", "Bomber", "Ace of Spades", and "No Sleep 'til Hammersmith", engraved Motörhead as one of the most important Heavy Metal bands to ever come from the UK. To this day, you hear Motörhead's music on movies, TV shows, and covered by bands all over the world. As we all know, Lemmy is one of the most influential Heavy Metal icons of all time, and whoever said that Lemmy is God, is absolutely right. 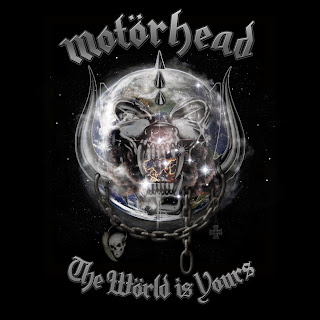 Their 21st studio album "The World Is Yours", is one of the best albums in the long killer history of the Motörhead franchise. The first track “Born to Lose", which is Lemmy’s slogan (he has it tattooed on his right arm) kicks off the album with furious power. Then, one song after the other the Motörhead train gets loaded on Jack and Coke without losing focus and keeping their batteries charged.


As you can see their single “Get Back in Line" is another Motörhead anthem and the video is killer. Another track that stands out is “Brotherhood of Man”, which has been labeled as the second part of their classic song “Orgasmatron”. While the song is similar in structure, it is Lemmy’s anti-political and anti-establishment lyrics mixed with the heaviest riff in Motörhead’s kick ass history that makes the song have that "Orgasmatron" vibe.

Their song “Outlaw" feels like the lost song from their legendary album "Ace of Spades". The western lyrics and fast frenzied riffing makes for a trip on a Harley down memory lane to a bar where they service JD and Coke all night long, and everyone is waiting for Motörhead to come on stage.

"The World Is Yours" is an amazing album and every member of the human race should own it. Lemmy may be 65, but has proven to have plenty of stamina left! One week from today Motörhead will be performing on the Jimmy Fallon show, following their performance at the Best Buy Theater in Times Square! Be there!

If you have never experienced Motörhead live, here are some upcoming tour-dates:

Related links:
Motörhead
Lemmy on Facebook
Motörhead on Twitter
Brought to you by HornsUpRocks.com at 3:04 PM No comments: