SLAYER on THAT METAL SHOW! 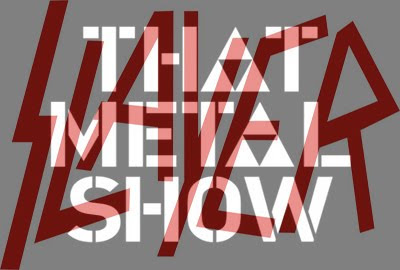 Legendary thrash Metal meisters Slayer, will be on VH1's That Metal Show tonight. The band will be represented by guitarist Kerry King and drummer Dave Lombardo. Slayer has never been on That Metal Show, so this promises to be a very special episode. That Metal Show is hosted by radio and television legend Eddie Trunk, and comedians Don Jamieson and Jim Florentine. The show is on its 5th season and we can't let it be canceled. This show has a similar role for Heavy Music to what MTV's Headbangers Ball had in the 90's.

So tune in tonight at 11 PM to watch history in the making! \m/

You can check out previous episodes right here

Charred Walls of The Damned in NYC On Thursday July 8, Charred Walls of the Damned (featuring Tim "Ripper" Owens and Richard Christy) took over The Gramercy theater in New York City. On this night, the band was joined by The Hixon, Magus Beast and comedian Don Jamieson from VH1's That Metal Show. 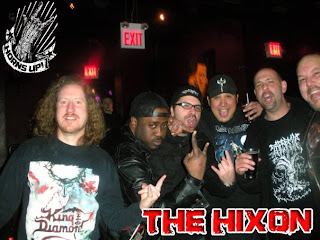 We arrived just in time to check out The Hixon, a band that we have been watching for a while and they are starting to get the recognition they deserve. The Hixon always puts on great performances and their music is brutally structured. Their message is very clear: they are here to spread the brutality through uncompromised and well focused music.

Following The Hixon, comedian Don Jamieson was introduced by Eddie Trunk and Jim Florentine, who are his co-hosts from VH1's That Metal Show. Don put on an excellent comedy show, something that we had never experienced at a concert and found it to be very entertaining. He talked about all things that rock: getting laid, drinking booze, smoking and rocking out at Duff's Brooklyn.

A few minutes after Don was cheered loudly off the stage, Charred Walls of The Damned took over center stage and played a rocking set. The all star band sounded loud and proud, and the New York crowd was very stoked to have Richard Christy from The Howard Stern Show and formerly from Death, Iced Earth and Control Denied, back behind the drums. Some of the highlights of their set included a cover of Iron Maiden's Number of The beast and Sepultura's Territory sang by Jose Mangin from Sirius XM Liquid Metal. 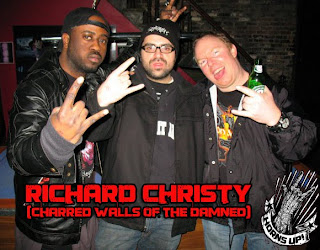 The night was a reunion of the New York Heavy Music family and it couldn't have been any better. We ran into Richard Christy at the end of the night and this is what he had to say: "I am so happy of our show tonight. New York is my home, so I wanted to make sure that everyone had a good time. I actually was nervous right before we went on, but everything was great! I want to thank all the fans for making this a memorable night!"

Here is Charred Walls of the Damned covering Sepultura's Territory, with Jose Mangin from Sirius XM on vocals:


Here is Charred Walls of the Damned covering Iron Maiden's The Number of the Beast:


Here is Charred Walls of the Damned with their video for Ghost Town: 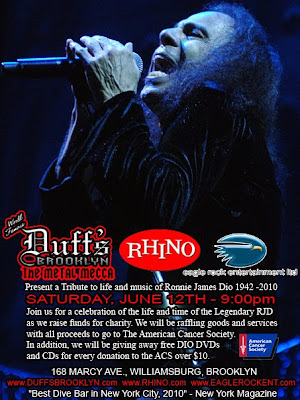 On a perfect Saturday night, we headed over to "The Metal Mecca" (A.K.A. Duff's Brooklyn). This time around it was not just a Heavy Metal party, this time the Duff's family was remembering and celebrating the legacy of the great Ronnie James Dio. As soon as we arrived at Duff's we ran into some familiar faces including drummer/comedian Richard Christy from the Howard Stern Show and Alex Skolnick from Testament. We also run into Jimmy Duff (owner), who was pumping the jukebox with all of Dio's back catalog.

After a few drinks with lots of good people, lots of Dio being cranked and lots of horns being thrown, we realized that Jimmy was scratching his head. Unfortunately his partner in crime Nightcrawler was indisposed that night and Jimmy had no one to help him with the fund raiser. Since Jo Schüftan from Horns Up Rocks "walks the walk", he volunteered to help out and raise some money for "The American Cancer Society". Hint to all the man out there: women love when a guy shows his soft humanitarian side.

Nights like this one are proof that the New York City Hard Rock community comes together strongly, whether it is at a show or at a celebration of someones legacy. We had experienced this first hand when Peter Steele passed away last April. Ronnie James Dio was remembered and celebrated by everyone who packed Duff's that Saturday night. Lots of people helped out by donating money, and left home with Dio music provided by the great folks at Rhino and Eagle Rock Entertainment.

At the end of the night we had the chance to chat with Alex Skolnick of Testament and the Alex Skolnick Trio, about Ronnie James Dio and his contributions to Heavy Music. We also discussed Alex's tremendous career, his musical influences and how it all started for him. Here are the results:

Here are a few interviews we previously conducted about the legacy of Ronnie James Dio:

Related links:
Duff's Brooklyn
American Cancer Society
Brought to you by HornsUpRocks.com at 12:39 PM No comments:

The Return of Faith No More 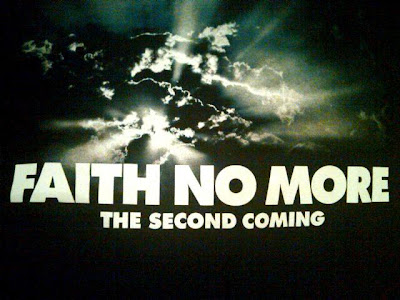 On Friday July 2nd and Monday July 5th, history was made in Brooklyn as Faith No More took center stage at the "Williamsburg Waterfront". We have two stories to share with you about this two epic nights, but first is first: Faith No More are one of the best live bands to ever play in New York City and we hope that their strong comeback influences many up and coming artists. They not only sounded crisp, but they dominated the audience like very few do. I mean, when you have Mike Patton fronting a band and legendary musicians such as Mike Bordin, Billy Bould and Jon Hudson backing him up, little to nothing can compare to the groove and vibe this phenomenal band creates.

On Friday we held our first ticket contest, and gave a chance for a fan to go experience the show. For Horns Up Rocks the most important mission is to create a bond between the fans and the artists they love. And if we can make a fans dream come true, then we are doing our job. The lucky winner was Billy Dawson, a fan who was able to go to the show thanks to Horns Up Rocks. What really stood out to us as fans, was the fact that he really wanted to go to the show but family is his priority and he didn't want to spend money on himself. We support the GOOD parents out there! Here is Billy's take on the concert (with pictures and all): 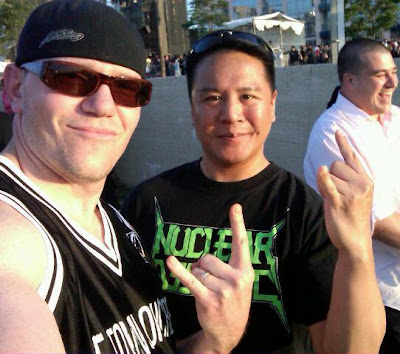 "This was the one band of my favorites i had never seen live. Last chance I had was 1992 in Dallas when they toured with GnR and Metallica. I opted for Lollapalooza the next day (with no regrets at all!!!) Fast forward 18 years - (they only toured in '98 after that) - to Brooklyn. Thanks to Godfrey Morales and the Horns Up Rocks crew! Cary wasn't going to let me go to Brooklyn because it was too expensive for her, and if she had the baby or any problems, its hard to get home fast (subway, traffic, etc). I was going to have to see the show in ....puke...Philly!!! BUT - i won tix to Brooklyn - and so it was written.... My friend said it was "divine intervention - you can't mess with that" he was right." 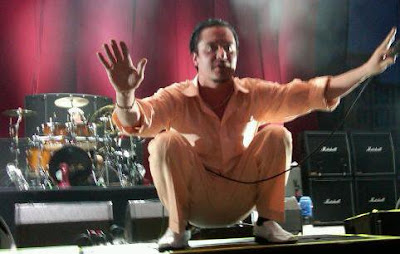 The show on Monday (which was the original tour date) couldn't have been any better. The weather was perfect, the beer was cold (except for the Heineken), the vibe was simply amazing and the Horns Up Rocks crew ran into a lot of great people. Once Faith No More started playing, following a very annoying MC, the night turned into musical perfection. The band was very excited to be back on stage in front of a packed house, and every song was simply perfect. The 5 hours of traffic from upstate New york, the Subway problems, plus guiding the lost girl who was on the wrong side of Brooklyn! Were classy minuets once this timeless band played one of the best concerts that Horns Up Rocks has ever experienced. If you have a chance to see Faith No More Live, do your ears a favor and go see them live!

I Started a Joke
Worm
We Care a Lot

Here is the band performing "The Crab Song", courtesy of Rahzel.

Pictures courtesy of Billy Dawson
Brought to you by HornsUpRocks.com at 9:27 PM No comments: