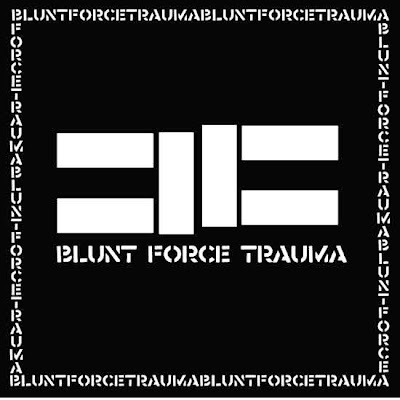 Listen up! The NEW Cavalera Conspiracy album "Blunt Force Trauma" slays, and since the awesome folks at Roadrunner Records know that you can't wait to listen to it. They have teamed up with Artist Direct and letting you listen to it before its release date! Then if you like it and if you are a TRUE Heavy Music fan that BUYS music, you will go and buy it on Tuesday March 29th.

Before you listen to this brutallic album which features 11 fresh Metallic anthems, plus an epic cover of Black Sabbath's "Electric Funeral" (Special Edition). Oh, and a duet between Max Cavalera and Roger Miret from Agnostic Front. Here are some facts about the NEW Cavalera Conspiracy titled "Blunt Force Trauma":

- Produced by: Max Cavalera
- Co-produced by Logan Mader for Dirty Icon Productions. Mader is a former member of Machine Head, where he was lead guitarist for their first two albums: "Burn My Eyes" and The "More Thing Change..."
- Recorded, mixed and mastered by Logan Mader at Undercity Studios, North Hollywood, California 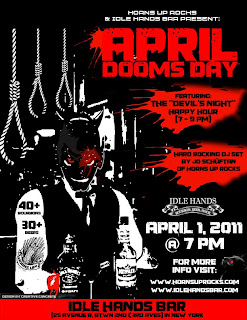 Once again we are teaming up with the awesome people of Idle Hands Bar and bringing you "April Doom's Day". Since it will take place on April Fools Day, we encourage you to prank your friends, then buy them a drink and rock to the hard hitting music that our founder Jo Schüftan will be providing you with!

Additionally, since this is a FREE event, we encourage all of you to come and meet some like minded people in the music industry. If you haven't experienced a Horns Up Rocks/Idle Hands Bar party yet, now is your chance!

Here are all the details:

Related links:
OFFICIAL Facebook Invite
Horns Up Rocks
Idle Hands Bar
Brought to you by HornsUpRocks.com at 4:33 PM No comments: 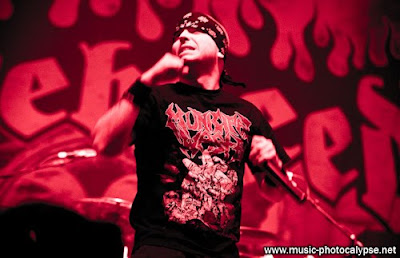 If there is a man that has single handily strengthen the Heavy Music scene by going above and beyond to make sure he leaves a worldwide mark, that man is Jamey Jasta (born James Shanahan; August 7, 1977). Not only is he the frontman of Hatebreed, Kingdom Of Sorrow and Icepick, but he is also an excellent role model to all his fans. Ever since he started screaming his lungs out when he was only 13 years old, Jasta has taken his musical career (on and off stage) to a new level of confidence and power!

Today he fronts three bands, he owns his own record label and clothing line, he also produces albums, and most importantly, he is a great father. Anyone who has met Jasta knows that he doesn't take anything from granted, which is why he works day in and day out in perfecting his craft.

Our good friends from Sirius XM Liquid Metal, have invited Jamey Jasta to takeover the satellites and tell you about his past, present and future! Here are all the details:

"Metal icon, scene leader, and frontman for Hatebreed & Kingdom Of Sorrow Jamey Jasta, drops by his favorite Metal destination to hang with Sirius XM Liquid Metal host Scotty to give his fans exclusive insight into the hectic life of one of the busiest dudes in Heavy Music.

This hour special will be backed by crushing tunes from Hatebreed, Kingdom Of Sorrow, Agnostic Front, Asesino, Sick Of It All, Metallica, Crowbar, Machine Head, Corrision of Conformity and more."

Straight Line Stitch: The Fight Of Our Lives 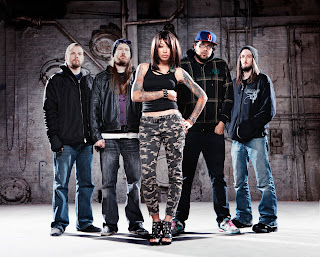 When Straight Line Stitch was formed in 1999, the bands philosophy was to focus on their musical path and to perfect their craft regardless of the challenges that were thrown at them. After various lineup changes (including two vocalists), Straight Line Stitch found their missing Joker in Alexis Brown, who was able to bring a sonic assault blended with beautiful harmonies. From that moment on the band started making a lot of noise.

While some fans have questioned the evolution of the band since they feel that the band sounds more commercial nowadays, on their latest album titled "The Fight Of Our Lives", the band proves that their musical evolution has placed them in the musical spotlight. As a result their are many within the music industry, including Jamey Jasta (Hatebreed & Kingdom Of sorrow), that believe that this is the band to watch in 2011.

After carefully listening to their brand new album (out today), Straight Line Stitch have proved that their musical evolution has helped them create original sense-full hard hitting music. What really stands out on this record, is Alexis's vocals and the musical variety within the record. While some may say that they are experimenting too much, we believe that the band has carefully crafted a solid album that promises to be the bands most successful album to date. Scheduled to appear at this years Mayhem Fest, the next 6 months should be very interesting for Straight Line Stitch. 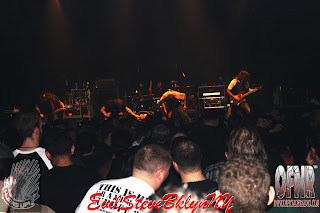 Recently, the band performed at The Gramercy Theater in New York City along with Times Of Grace, and we had the chance to interview vocalist Alexis Brown and Straight Line Stitch's founder/guitarist Seth Tacker. During this memorable interview we discussed the past and the present of of the band. Sit back, relax, and throw your HORNS UP!

Here is all the information about their new album: 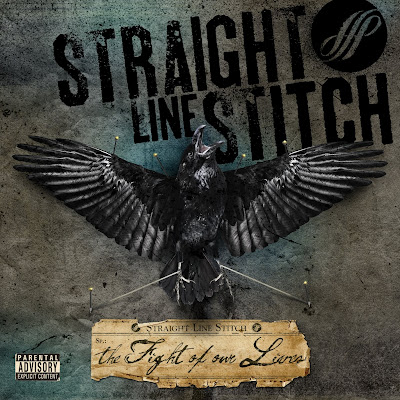 You can listen to their NEW album "The Fight Of Our Lives" right here!

Here is their latest video for their song "Conversion", taken from their new album "The Fight Of Our Lives":

A Perfect Circle announce US Tour 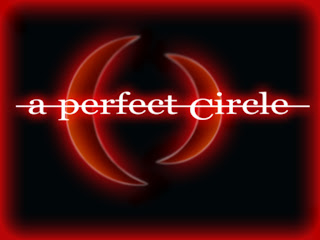 After 6 years of silence, A Perfect Circle are ready to make a lot of noise and once again hit the road and make thousands of fans very happy! This obviously means that Tool vocalist and front man Maynard James Keenan will be performing live on stage. As we we all know his stage presence is incomparable, and he can also be considered one of best singers in the history of Rock N' Roll. We can already smell the beers, hear the rowdy crowd and envision a sold out tour.

The tour will kick off on May 22nd at the Rock on the Range Festival in Columbus, Ohio and will conclude on August 9th in Pittsburgh, Pennsylvania. The 2 month tour will go from coast to coast and it will include two shows in New York Rock City, one at the Hammerstein Ballroom and the other at The Beacon Theater. 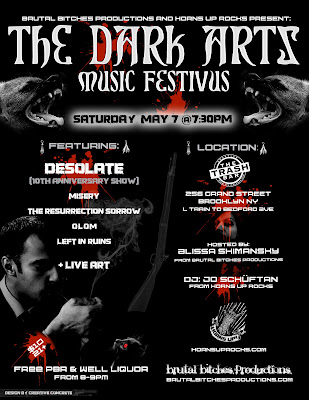 After the success of the March Metal Beatdown, we have been asked to bring the mayhem back to Brooklyn's Trash Bar! On May 7, 2011 we are joining forces once again with the awesome ladies of Brutal Bitches Productions! Not only do we have 5 amazing live bands that will please your ear drums, but we will also have some amazing live art that will make your jaw drop. 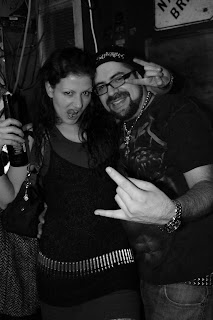 Additionally, the mighty Desolate will be celebrating their 10th year anniversary that same night! Joining Desolate at "The Dark Arts Music Festivus" will be Misery, The Resurrection Sorrow, and Left In Ruins. The event will be hosted by the amazing Alissa Shimansky from Brutal Bitches Productions and DJed by Jo Schüftan of Horns Up Rocks!


Here are all the details:

Lineup:
- Desolate (10 Year Anniversary show): While many bands have come and go, while some musicians have risen and fallen, while some artists have given up their careers in music and various venues have shut down. New York City's Desolate has stayed true to the game for 10 years of punishing brutality! Come celebrate their 10th year anniversary!

- Misery: At present time the Heavy Music scene in the tri-state area is going through a revitalizing process, in which we are starting to see more and more bands stepping up their game and getting away from a set formula. One of those bands is Misery, a band that after 10 years of hard work, is finally starting to get the recognition they deserve. After a successful tour with Devildriver, Misery is ready to take over Brooklyn! 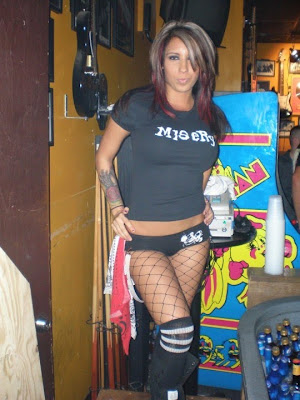 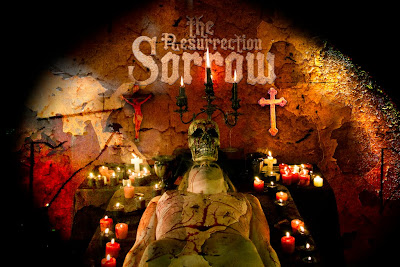 - Left In Ruins: Over the course of the last five years, Left in Ruins has sought long and hard to find the most brutally talented musicians. Throw Luigi Cilento (Vocals/Guitar), Jorge Naranjo (Lead Guitar), Jaymz Delisle (Guitar), and Ben Policello (Drums), into a blender with Iron Maiden, Mastodon, Lamb of God, Slayer, Metallica, Black Sabbath, and Pantera, and you will be left ‘with a ferocious blend of groove-based death metal and thuggish hardcore.’ – Metal Hammer 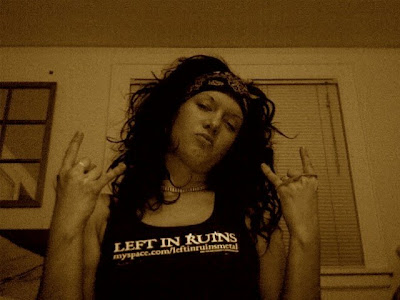 OLOM: A band that can help redefine the direction of Heavy Metal. In the midst of soaring guitars, thunderous bass lines and gritty lyrics, they are tasteful and unpretentious. This is a group that is not afraid to take risks and fearless of saying the uncomfortable things. At ease with being themselves, OLOM is a psychological representation of all that is Metal. Come check this great band out! 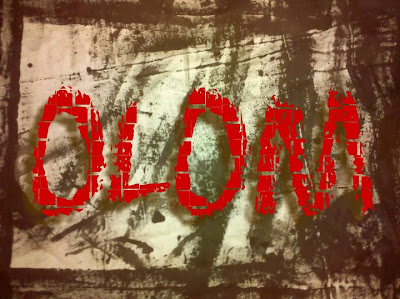 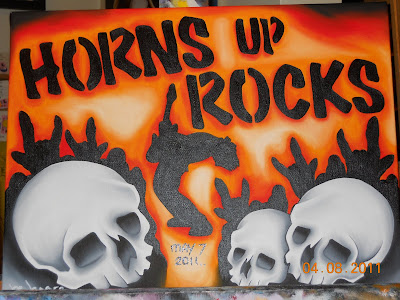 Come and witness what promises to be a cornucopia of creative mediums, surely to inspire and stimulate all of your darkest Metal senses. \m/

DJed by Jo Schüftan of Horns Up Rocks