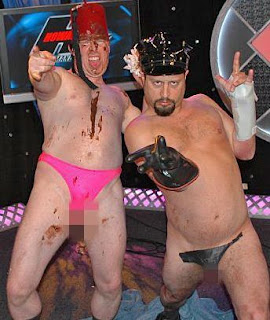 When most people hear the name Richard Christy, they immediately think of the stunt guy from the Howard Stern Show on Sirius Satellite Radio. For us Metaleros, Richard Christy is synonymous to Heavy Metal drumming. Believe it or not, Richard has been a professional Heavy Metal drummer since 1995. In this time span, he has played in legendary bands like Death and Iced Earth, and recently he formed a band with Tim "Ripper" Owens called Charred Walls of the Damned.

Anyone who has met Richard Christy knows that not only is he very talented, but also a gentleman in every sense of the word. This might be hard to grasp after hearing and seeing his stunts on the Howard Stern Show, but it is all just a show. One thing that is evident, is that the same passion that took Richard to Heavy Metal heaven (or hell), also took him to radio elite. After all, being a drummer in a Heavy Metal band and working on the best radio show in history take a lot of discipline, passion and perseverance.

Recently, we chatted with Richard Christy outside of the Sirius XM studios, about Hixonfest 2010, his gig at the Howard Stern Show, and also about his new band Charred Walls of the Damned. Here is what we predict to be another hit delivered to you by Horns Up Rocks!

IMPRINTED by Jo Schüftan (Founder of Horns Up Rocks)
Brought to you by HornsUpRocks.com at 3:56 PM

Richard is the man.

is there any more footage of hixonfest going to be up?.