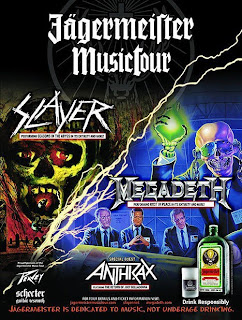 On Friday October 8th, we headed to the Nassau Vetarans Memorial Coliseum in Long Island to experience one of the best tours in Heavy Metal history. Which tour are we talking about? The second leg of the American Carnage tour, sponsored by Jägermeister Music, which features Slayer, Megadeth and Anthrax.

We arrived at the venue around 4 o'clock, and immediately headed to lot 6 (pretty appropriate) for Jo Schuftan's (founder of Horns Up Rocks) tailgate birthday party! As soon as we arrived to lot 6, Heavy Metal was blasting from every car in the parking lot! It was heaven for any Metal head and hell for everyone else. After a few beers, some food, and lots of Metal, we all headed inside for the Anthrax experience. 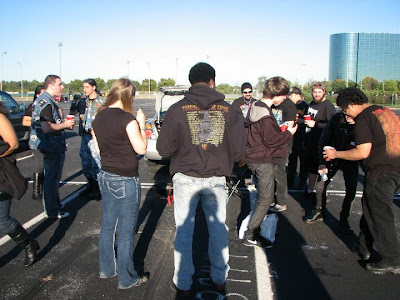 As soon as we stepped inside the venue, the roar of the crowd was making the walls rumble out of control. People were raging down the ramp to get inside the pit. Anthrax kicked their killer set with Caught In The Mosh, which got the pit moving from the get go. As we were watching Anthrax perform, it became evident that Joey Belladonna is one of the best front-man in Heavy Metal today. During their song Antisocial, the entire venue got goosebumps as Joey had the crowd chanting in unison. The highlight of their set was the debut of their new song titled Fight Em' If You Can, which the crowd really enjoyed. Anthrax were truly awesome and could have easily headlined the show! 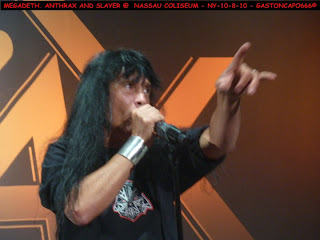 Following Anthrax, Jim Fiorentine from That Metal Show, stepped on stage and welcomed everyone to American Carnage. He did a few jokes which got the crowd pumped for Megadeth and Slayer. When he asked what band would be the fifth band if there was a "Big 5" tour, the crowd made it evident that Overkill would be the perfect fit.

A few minutes later the lights went out and Megadeth's intro which featured music by Heavy Metal legends Black Sabbath started blasting through the PA, the crowd went insane. When icon Dave Mustaine came on stage, the crowd roared louder than a furious lion! As soon as they started playing the intro to their legendary album "Rust In Peace", the venue's decibel level went up thanks to the thousands of screaming fans. For the next hour Megadeth demonstrated why they are one of the best Heavy Metal bands in history, as they played every song from their "Rust In Peace" album. Even though it is a real hard task to be "sandwiched" between Slayer and Anthrax, Megadeth didn't disappoint. 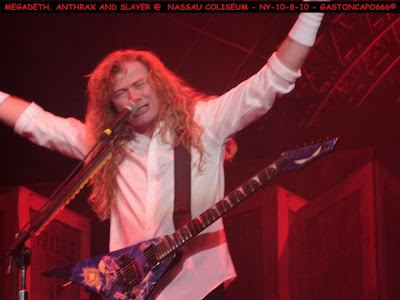 Once Megadeth completed their therapeutic annihilation, Jim Fiorentine from That Metal Show surprised everyone as he was standing at the sound board with the sexy Jägermeister girls. He asked everyone to raise their cups in the air, and do a shot for the legendary Dimebag Darrell from Pantera and Damageplan. Then he demanded the for the crowd to do a Slayer chant, after Anthony De Moya and his group of friends kept wildly chanting Slayer, Slayer, Slayer! They didn't want to hear Don talking, they wanted Slayer's musical mayhem!

Next thing you know, the lights go out, the crowd goes wild, and Slayer's stage curtain is covering the band as they start playing World Painted Blood. Once they dropped the curtain, the entire place erupted into a volcano of shredding and headbanging. Slayer sounded amazing, very powerful and full of energy. It was amazing to see them play "Seasons In The Abyss" in its entirety. After seeing Slayer perform in front of a crowd that went ape shit. One thing is for sure, the Slayer quarter is not ready to retire anytime soon. The rumors are useless, when you see how this guys always deliver the insanity that made them Heavy Metal legends from the get go. 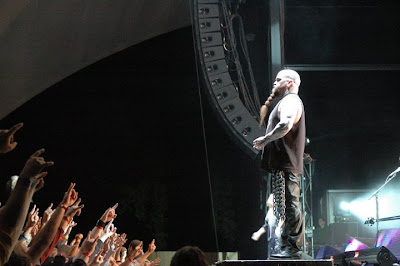 After seeing American Carnage 2, it is evident that true Heavy Metal is alive and well! And that fans are hungry for big tours like this one. \m/

IMPRINTED by Jo Schüftan (Founder of Horns Up Rocks)
Brought to you by HornsUpRocks.com at 3:25 PM