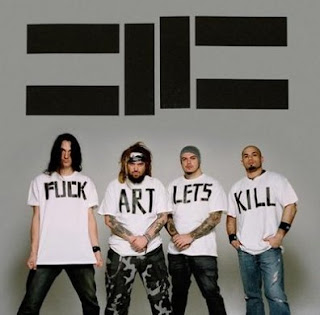 This will be the follow up to their 2008 epic release titled "Inflikted", an album which marked the reunion of Max and Iggor Cavalera. The Cavalera's had parted ways when Max left Sepultura in 1996. The Cavalera siblings co-founded Sepultura in 1984. Brazils' Sepultura (grave in Portuguese) redefined and established Heavy Metal outside of the United States and Europe. After Max left the band due to internal problems, the 2 brothers parted ways and didn't talk to each other for over 10 years. After Dimebag's death, Max and Iggor joined forces at the annual "D-Low Memorial Festival". At the event they were unable to refuse/resist the impact of their musical bond and Iggor joined Max on stage and together they jammed some Sepultura songs. Next thing you know, the brothers started Cavalera Conspiracy. The band also features New Jersey's shredder Marc Rizzo (Soulfly), and Johnny Chow on the low end.

Blunt Force Trauma is due out on March 28th via Roadrunner Records. Here is the track listing:

Cavalera Conspiracy was on the media spotlight once they released "Inflikted", one big feature was the brothers on the cover of Metal Edge Magazine in an homage to The Blues Brothers. The album was also an instant hit on Sirius XM Liquid Metal that year. "Inflikted" was described as "gobsmackingly violent" and Outburn mused, "If only all family reunions could be this awesome!"

Below is a further sampling of what the press had to say about Cavalera Conspiracy and "Inflikted":

"The brothers who formed Sepultura, putting Brazil on the global metal map in the process, have reunited-personally and professionally-after more than a decade of acrimony, and their new album is a ferocious homecoming indeed." --Revolver, May 2008

"The fruit of their labor, Inflikted, is an explosive flashback to the remorseless thrash and primal groove-metal Sepultura created with 1991's Arise and 1993's Chaos A.D. Although the songs were arranged and recorded quickly, Inflikted sounds neither hastily executed nor incomplete. There's an almost telekinetic connection between Max's riffing and Iggor's drumming-the kind of chemistry that comes only from musicians who learned to play together and honed their craft through years of studio sessions and live shows." --Artist Direct

"For metalheads far and wide, it's nice knowing the Cavaleras are tight again and sounding perhaps better than ever on Inflikted." --MTV News, April 2008

"The band mixes the old with the new to create something fresh." --My City Buzz.com

"Cavalera Conspiracy is not a mercy project, nor is it about cashing in. It's about bringing the metal back." --Ink

"No doubt this will be remembered as one of the most important heavy music releases of 2008, and quite possibly ever." --ARTIST direct

"Given Inflikted's overall high standards, the Cavalera Conspiracy may be around for a while." --All Music

So on March of 2011, you have an appointment with the Cavalera brothers, as they release the second album by their band Cavalera Conspiracy! Why pick it up? Because it will have more impact then a "Blunt Force Trauma" to the head! 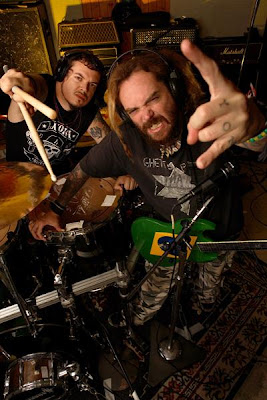 IMPRINTED by Jo Schüftan (Founder of Horns Up Rocks)
Brought to you by HornsUpRocks.com at 11:02 AM