A message from WATAIN! 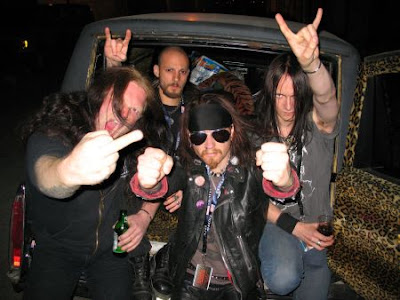 "North and South America have now been left in ashes, and with that the "Lawless Darkness Tour 2010" is over. Hail to those who made it possible, and those who made it even more triumphant; North: Watain Disciples USA, Goatwhore, Black Anvil, Decibel Magazine, Liz and Dave at Earsplit, Jimmy and the Duff's crew, Josh at Dean Guitars, Engl Amps, Black Witchery, Negative Plane, Averse Sefira, Hod. South: Arma Productions, Hells Angels Antofagasta, Careloco and The Chilean Watain Militia, Kythrone, the mighty Mortuary Drape, the Tumba crew, and all those whose presence strengthened us along the long and winding road through hell and back. You know who you are. A special mention to S.L of The Devil's Blood who took on the lead guitar duties in North America; hail brother! Finally, a thunderous salute to our iron crew, without whom none of this would have been possible." -WATAIN

Here is a clip from Swedish TV (with English subtitles) about WATAIN's appearance at the Sweden Rock festival in June earlier this year. The concert was aired on the Swedish national radio program "P3-Live" on Thursday December 23rd:

In light of all this, the band would like you to contemplate upon the following lines:
"It is the magic combination of fierceness and beauty that makes the Wolf an exception even in nature. Revered outlaws, feared in their bestial nature, yet also objects of fascination and curiosity, of naturally inhabited and unreachable grace, that men love to hate, and hate to love. But regardless of what judgement the vox populi might pass on the nighttime predators, they remain just that; a rare breed of hunters; alone, aside, untamed, always hungry..."

Related links:
Watain's Official Site
Brought to you by HornsUpRocks.com at 5:19 PM