WARNING: Alekhine's Gun is pointing at EVERYONE 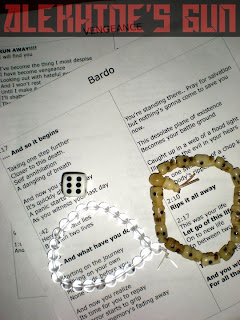 Ever since we first had Alekhine's Gun pointed to our heads, we have kept a close watch on this furious New York City band. Hailing from Brooklyn, the band is composed by Jessica Pimentel (voice of steel), Jeff Martinez and Paulie Pisano (shredders), Angel Cotte (skin basher), and Daniel Martinez (groove meister). If music can be used as a weapon, this band is armed to the teeth and extremely dangerous.

It all started in June 2010 when Jeff (A.K.A. Sheprock) approached Jessica (A.K.A. The Crusher) with some tracks he had written. The Crusher loved the effects the music had on her eardrums and she immediately started jotting down some lyrics. Next thing you know she allowed the dragon that lives inside of her mouth to come out and play, and the Alekhine’s Gun terror plot was in full effect.

From that moment on their game plan has been to create something extreme that scares the neighbors, and grabs Metaleros by their throats! Their crushing music blends various elements of Heavy Metal and Hardcore in a chaotic yet beautiful way (as long as you see beauty through disorder).

After seeing them perform live, and listening to their music over and over again, there is no doubt in our mind that as long as Alekhine’s Gun remains focused on their furious craft, they have the right artillery to take the world hostage!

If you haven’t heard Alekhine’s Gun yet, you need to do your ears and neck a favor, and listen to them now! And if you want to check them out live, come to the 2011 March Metal Beatdown on Saturday March 5th at The Trash Bar! \m/

Here is an interview we conducted with "The Crusher" last year on Halloween!