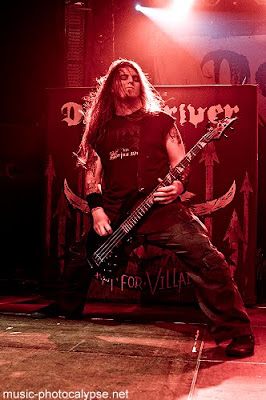 Jon Miller has decided to leave DevilDriver after being with the band since their formation in 2002. Their latest album titled "Beast", was released on February 22 via Roadrunner Records. Here is Miller's OFFICIAL statement:

“I just wanted to thank all of the DevilDriver fans around the world for their die-hard love and support for the past nine years. Yesterday, I decided to leave DevilDriver. It was the most difficult decision of my life but it is something that I needed to do for myself. I had the best times of my life hanging out with all of you guys, but it is time for me to move on. Much love to everyone.”

Here is the band's OFFICIAL statement:

“Everyone in DevilDriver wishes Jon Miller the best in the future!!! Thank you for everything you have done for the band in the past 8 plus years. Much happiness and success to you, Jon.”

Sources close to the band believe that Miller left the band in order to live a healthier lifestyle. Miller did not take part of DevilDriver's Canadian tour in January or the Australian tour in February and March, since he decided to go to rehab. This was after Miller was forced to leave the bands past 2 European tours, due to alcohol and drug related problems. This is a statement he had made earlier this year regarding his substance abuse:

"I need to make a change so that I can save my own life and keep the friends that I still have left. I know that alot of DevilDriver fans seek me out first as the one to party with because I consider myself a very social person who is quite outgoing, personable and friendly. That was all fun in my 20′s touring with the band, but as I am entering my early 30′s I can feel the damage catching up with me mentally and physically. I don’t want to burn out prematurely before my time on this Earth is up. On January 1st I will be entering an intense rehabilitation program in order for me to reclaim my health and the person who I once was."

The band has not confirmed a permanent replacement for Jon Miller.

We wish Jon all the best in his path to a healthier lifestyle! \m/

Related links:
Devil Driver
Music Photocalypse
Brought to you by HornsUpRocks.com at 5:58 PM

Man I wish Miller the best but its like....DevilDr now....wheres the iver?