Metallica: 25 years of Master Of Puppets 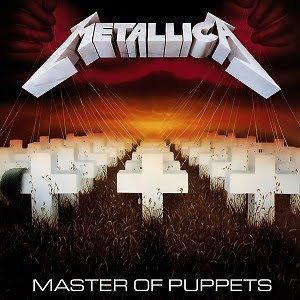 Metallica's legendary album "Master Of Puppets" is easily one of the most influential and kick-ass albums to have ever been recorded in Heavy Music. Recorded at Sweet Silence Studios in the fall of 1985 in Copenhagen, Denmark, Metallica's mission was to create an album that would help the band become a global phenomenon. Not only did they manage to do this, but 26 years later this album is still as relevant as it when it came out. "Master Of Puppets" was also the last record that bassist Cliff Burton recorded with the band, before his tragic death in September of 1986.

Here are some facts about this legendary album:

- Master Of Puppets reached number 29 on the Billboard 200, and spent 72 weeks on the charts.

- On November 4, 1986 it became the band's first album to be certified gold after selling over 500,000 copies. Master Of Puppers eventually sold over 6 million copies in the United States and was certified 6x platinum by the RIAA. This was done without any radio airplay or the release of a music video.

- After the release of the album, Metallica went on tour in the United States with Ozzy Osbourne. During this tour vocalist/rhythm guitarist James Hetfield broke his wrist while skateboarding down a hill. The tour continued with Hetfield on vocals, and guitar technician John Marshall on rhythm guitar.

- Every song on "Master Of Puppets" (except "Leper Messiah" and "Damage, Inc.") can be played on "Guitar Hero: Metallica". The song "Battery" is featured on Rock Band 2.

- ESPN has used the title track "Master of Puppets" to promote the NASCAR Nationwide Series. It is also featured on the movie "Old School" when they kidnap the pledgers.

- This is one of the albums that every Metalero should have in their collection.

Related links:
Metallica's Official Site
Brought to you by HornsUpRocks.com at 2:32 PM