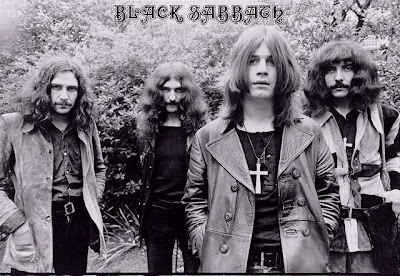 Today is a great day for all headbangers of the world! Heavy Metal pioneers Black Sabbath have announced that the original lineup composing of Ozzy Osbourne, Tony Iommi, Geezer Butler, and Bill Ward, have reformed and are already working on a new studio album! Fans can expect a new Black Sabbath record in 2011, and it will be the bands first album together since 1978's "Never Say Die!" This is what guitar legend Tony Iommi had to say about this historic reunion.

"We’re really looking forward to it and I think the stuff we’ve been writing is really good. It’s more back to the old original stuff."

As you all may recall, the band's original lineup had previously reunited in the late 1990s to record a new studio album with producer Rick Rubin, but the recording sessions were halted because of Ozzy's solo album. As a result, the band went on an indefinite hiatus. This is how the reunion of the three remaining members of Black Sabbath with Ronnie James Dio came to life, but was concluded when Ronnie passed away from cancer in May 16, 2010.

At the moment the band is only focusing on the studio album and has not announced any touring plans, mainly because drummer Bill Ward suffered a heart attack during the bands rehearsals for the reunion tour in 1998. "He hasn’t been 100 per cent. He had an operation a few months ago, so we’ll see how he is," commented Iommi.

Lets all throw our HORNS UP for Black Sabbath! We personally can't wait for a NEW Sabbath album!

Related links:
Black Sabbath
Brought to you by HornsUpRocks.com at 11:48 AM