HLN 'Salute To The Troops': The Unsatisfied send "Love & Blood" to The 18th Infantry in Iraq! 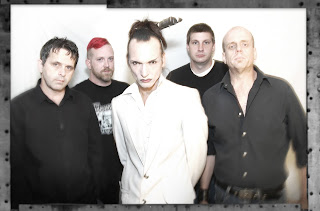 Punk rock cult legends The Unsatisfied were featured on HLN's "Salute To Troops" on Monday (October 31st). The group honored Sgt. Michael Watson of the U.S. Army 18th Infantry who is currently serving at Camp Taji in Iraq. Earlier, Watson, who is from Dalton, GA, had contacted The Unsatisfied on Facebook asking how he could get some of the group's music, and commenting that the soldiers in his unit had a hard time getting their hands on new entertainment while being deployed.

The punk rockers sprang into action and had a box full of CDs, stickers, snacks and other items shipped to the troops within days. Sgt. Watson wrote an enthusiastic thank you note that said in part, "the CD's have disappeared, there are Unsatisfied stickers on our gun trucks and my guys are singing your songs!"

After a recent photo shoot the group shot a short segment via iPhone to post on CNN's iReporter website saluting Sgt. Watson and the rest of the 18th Infantry. Doug Bales, drummer for The Unsatisfied: "We didn't really expect HLN to run the piece. We were just going to post it on the site and send Sgt. Watson and his wife a link to share with the troops and their friends. We thought they'd get a kick out of it."

Group bassist, E.T. commented "It made us all proud that our music meant something to people who are risking everything on a daily basis for our country. We've gotten to be friends with Sgt. Watson and hope to play a show for him when he gets home."
-Robin Meade, anchor for HLN's Headline News Morning Express, "That is the most original Salute To Troops we've ever had!"

Related links:
The Unsatisfied
Click here if you would like to salute our troops in an original and flashy way!
Brought to you by HornsUpRocks.com at 11:22 AM