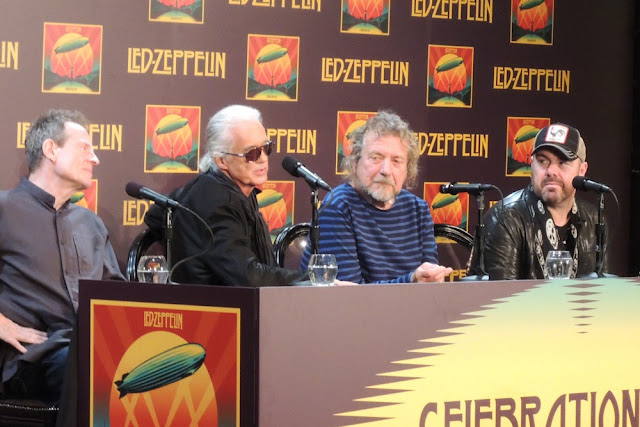 Plant: "That night, back then, we were just hangin' on for dear life. We were just watching each other, we were so happy we were getting it right. There were moments in it where we just took off, pushed off into some place. The responsibility of doing that four nights of week for the rest of time is a different thing. We're pretty good at what we do, but the tail should never wag the dog. If we're capable of doing something in our own time, that will be what will happen. So any inane questions from people from syndicated outlets, you should just really think about what it takes to answer a question like that in one second. We know what we've got."

Page: "I think if we had the opportunity to get back together again, which is what we had there to do the O2, things had left us a little uncomfortable like Live Aid and the Atlantic 40th, etc., we just really wanted to get it right and go out and play to people who maybe never heard us, who had heard about this reputation and what we were about, and basically stand up and be counted for what we were. That's my feeling, anyway."

Plant: "I think expectations are a horrific thing. If you go off and play in North Africa, you know you're going to have a good time and work with people and there's nothing else about it. That's how we started in a room with Jason's dad all that time ago. So to do anything at all together is such a kind of incredible weight, because sometimes we were fucking awful. And sometimes we were stunning and a couple of times we tried to get together in the meantime. I think we were really propelled by Jason and his enthusiasm and his dark glasses. He really brought the atmosphere and expectation because he knows far more about us than we do. He's got all the bootlegs, and he's in touch with the people who make the bootlegs."

The band also appeared last night at the gala premiere of the movie at the Ziegfeld Theater.

Here is video footage of the press conference (courtesy of Artisan News):

Related links:
Led Zepellin
Brought to you by HornsUpRocks.com at 7:44 AM