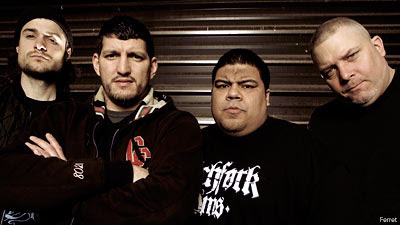 New York Hardcore titans Madball, will be releasing a new record on October 12th. The new record is titled Empire and it will be out through Good Fight Records here in the USA and on Nuclear Blast Records in Europe. Make sure you pick it up!

Here is the first song to be released by the band via theirMySpace page, its titled R.A.H.C. The songs message is very clear and is dedicated to all those who claim that Hardcore music is dead and gone. The reality is that Hardcore is a musical genre that has expanded beyond the horizon and today it is a worldwide movement, thanks to bands like Madball. Check this awesome song out!

Here is what Freddy and Hoya had to say about Empire:

“Erik has been great to work with,” states Cricien. “He’s definitely a perfectionist, which I have no problem with. It’s going to benefit us in the end! He’s got his own techniques like everyone does, so he’s going to bring a different dynamic into the sound/mix. I’m excited for people to hear the finish product. I predict it will be very HARD!” - Freddy Cricien

"The new record is groovy and hard, full of good Madball songs about life! It reminds me of Demonstrating My Style and Hold It Down, but the songs are definitely up to date.
We can't wait for people to hear it." - Hoya Roc

Related links:
Madball on MySpace
Brought to you by HornsUpRocks.com at 4:08 PM