DOWN: Diary of a Mad Band 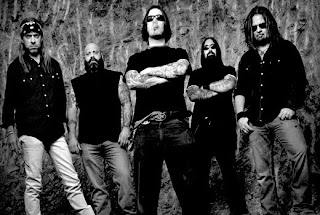 New Orleans has always been known for its influence in music and its multilingual cross-cultural heritage. This ever-changing region of the United States gave birth to Jazz music, and is universally known for its cuisine. Recently they became known for their NFL football team, thanks to the New Orleans Saints victory over the Indianapolis Colts at this years Super Bowl in Miami. What does all this have to do with Heavy Music? Well, NOLA is the birthplace of one of the best bands in the country, which band are we talking about? DOWN!

Formed in New Orleans in the early 90's, Down started as a side project formed by Pantera's own Philip Anselmo, COC's Pepper Keenan, Crowbar's Kirk Windstein, Eyehategod's Jimmy Bower and former Crowbar bassist Todd Strange. After the demise of Pantera, Philip Anselmo recruited Pantera's bassist Rex Brown, and got Pepper, Kirk and Jimmy on board for the rebirth of one of the best "super-groups" in Heavy Music today. They immediately entered the studio and recorded one of the best sounding records of the last 10 years: Down II "A Bustle in Your Hedgerow". Soon after the completion of the album, they went on the road for what they called "An Evening With Down". The concept was to have videos from legendary bands like Black Sabbath, Led Zepellin and Metallica play before Down's set, instead of having opening acts.

In 2006, Down went to Europe for their first European tour and documented it all on video. The end result is a 130 minute DVD featuring 17 live songs, and plenty of behind the scenes footage. This is what guitarist Pepper Keenan had to say about the DVD:

"The DVD is an in-depth look at what five boys from the wrong side of the tracks can achieve when motivated by the will to escape hard times, fueled by an unexplainable quest to destroy live and be embraced by the love of fans whom we had not had the pleasure of meeting yet. This is how it's supposed to be: rock solid."

"Diary of a Mad Band", will be released in the United States on October 5th through Down Records/ADA. Here is the OFFICIAL trailer:


Make sure you support the underground music scene and buy this amazing DVD.

IMPRINTED by Jo Schüftan (Founder of Horns Up Rocks)
Brought to you by HornsUpRocks.com at 1:08 PM