Tommy Vext: STRONGER THAN ALL 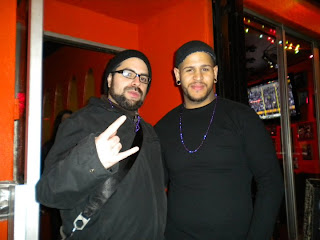 On Sunday November 28, thanks to Doc Coyle (God Forbid) and Ria Katz (Santos Party House), God Forbid, Mutiny Within, Dead Men Dreaming, Timeless, Human Decline, The Judas Syndrome, Empyreon and a Great Day To Die, took center stage at Santos Party House in New York City, in order to help Tommy Vext (former singer of Divine Heresy and Snot) raise some funds. The matinee was a memorable event, and it was really good to see so many people supporting such an awesome cause.

While all the bands kicked ass, the highlight of the night was when Tommy returned to the stage after 17 months (his last show had been on May 17, 2009 with Snot in California), and played an emotional acoustic set. Tommy was joined by his best friend Doc Coyle from God Forbid, who is also his band-member on a new project they recently started working on (pre-production started on December 9th).

The project was suppose to start months ago, but it had to come to a halt when he was viciously attacked by his own brother. Here is an extract of an interview with Tommy (courtesy of Metal Insider) explaining what happened that horrific day.

"On the evening of September 19th I was leaving my apartment in Brooklyn to visit my sister and was struck over the back of my head from behind during an attempted robbery. I fell and turned around and was struck again with a crowbar. The metal bar broke my left arm and this is when I saw my attacker. A 6’1, 320 pound man covered in dirt & blood. It was my estranged brother. Homeless, intoxicated and desperate, he repeatedly hit me on the back and sides with the weapon as I tried to shield myself from the blows. I managed to get on my feet and throw him off of me. I took off to a neighbors house and called 911. The ambulance arrived and I was rushed to the Hospital. After multiple X-rays & MRI’s, the doctors found I had a fractured skull and broken arm. I was discharged the next day. Because my attacker had not been apprehended I was staying with a friend in Manhattan during the first few days of my recovery. Four days after the incident, I collapsed in a Manhattan restaurant and was rushed back to the Hospital. This time the doctors found I had been internally bleeding since the 19th and now my spleen had ruptured. I went into emergency surgery at Cornell Hospital where my spleen was removed and I received a blood transfusion."

Here is a video that our good friend Tommy Jones from "The Studio" in New Jersey, shot and edited at the benefit. If you couldn't make it, but still want to help Tommy out. You can donate any amount via his PayPal account: tommyvext@gmail.com. We also have an EXCLUSIVE interview with Tommy coming soon!

IMPRINTED by Jo Schüftan (Founder of Horns Up Rocks)
Brought to you by HornsUpRocks.com at 4:39 PM