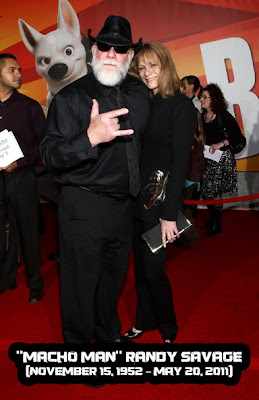 Today former badass pro wrestler "Macho Man" Randy Savage died at the age of 58 in Tampa, Florida. According to Police Savage had a heart attack while driving and crashed his 2009 Jeep Wrangler when he veered across a concrete median through oncoming traffic and "collided head-on with a tree. He was then transported to Largo Medical Center, where he died from his injuries. His wife was also in the car but survived with "minor injuries" 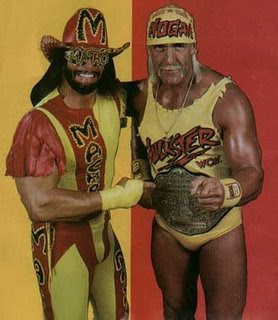 "Macho Man" became very popular in the 90's thanks to his charisma and outrageous behavior while being a wrestler on the WWF and the WCW circuits. Here is what his former colleague Hulk Hogan had to say about Savage's death:

Here are some facts about "Macho Man" Randy Savage:

- His real name was Randall Mario Poffo.
- He was born on November 15, 1952 in Columbus, Ohio.
- Twenty championships during his professional wrestling career.
- Seven-time world champion.
- Two-time WWF Champion.
- Four-time WCW World Heavyweight Champion.
- One-time USWA Unified World Heavyweight Champion.
- One-time WWF Intercontinental Champion.
- WWE named Savage the greatest Intercontinental champion of all time and credited him for bringing "a higher level of credibility to the title through his amazing in-ring performances."
- He was also the 1987 WWF King of the Ring and the 1995 WCW World War 3 winner.

RIP "Macho Man" Randy Savage, you will be missed by your family, friends, and fans! \m/

Related links:
Macho Man
Brought to you by HornsUpRocks.com at 1:54 PM

I remember being shocked to see him on my town's community-access television channel at the height of his popularity, promoting it. Seeing those clips, I just feel so old...