Tony Iommi Performs With BLACK SABBATH For The First Time Since He Was Diagnosed With Cancer - Live Footage Available! 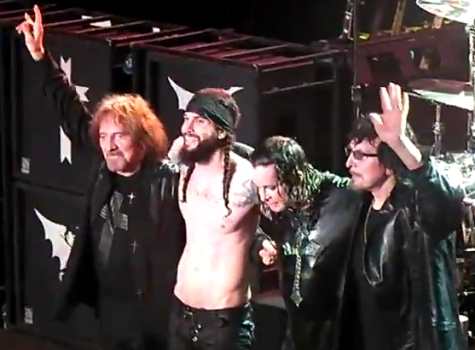 Last night (Saturday, May 19) BLACK SABBATH performed an intimate hometown concert at the O2 Academy in Birmingham, England. The 3,800 capacity venue served as a warm-up show in anticipation of the band's appearance at the Download Festival at Donington next month. While there has been a lot of controversy around the "reunion" of BLACK SABBATH, it was great to see Tony Iommi back on stage.

BLACK SABBATH's setlist for the show was as follows:

Fan-filmed video footage is available below.

BLACK SABBATH's first hometown performance in 13 years — and their first concert since 2005 — featured three-quarters of the legendary Heavy Metal act's original lineup — guitarist Tony Iommi, singer Ozzy Osbourne and bassist Geezer Butler. Tommy Clufetos, a member of Ozzy's solo band, is filling in for original SABBATH drummer Bill Ward, who is sitting out the group's reunion shows due to a contractual dispute with his bandmates.

"Thank you, thank you, thank you Birmingham. Best fans ever — you brought out the best in us", commented Geezer Butler. "It was a privilege playing for you tonight. Tony [Iommi, SABBATH guitarist] was a hero — you were the best medicine he has had. Proud to be a Brummie."

According to Black-Sabbath.com, last night's concert was professionally recorded and filmed.

Click here to check out the NEW BLACK SABBATH Website
Brought to you by HornsUpRocks.com at 7:04 PM