Online Petition To Get AT THE GATES To Headline The 2013 Summer Slaughter Tour! 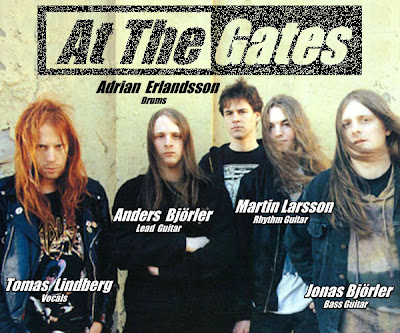 At the Gates is an extreme Metal band from Gothenburg, Sweden, and a major progenitor of the Gothenburg Death-Metal sound. Their early albums lean towards a Death Metal sound, but later albums (especially Slaughter of the Soul) sound more like melodic Death Metal.

Initially active from 1990 to 1996, the band reformed in 2007 for a reunion tour before breaking up once again in 2008. In December 2010, they reunited again, but have no plans to tour extensively or record new material.

We believe that if the fans DEMAND for At The Gates to headline the 2013 Summer Slaughter Tour, this will lead to the band to join forces and record some NEW music. And if not, at least the entire nation can experience At The Gates' musical power in a live intimate setting! SPREAD THE WORD!

Related links:
At The Gates
Brought to you by HornsUpRocks.com at 3:08 PM