With a little bit more than three months left before the release of CLUTCH's highly anticipated NEW studio effort 'Earth Rocker', the band has officially unveiled the album's artwork and has announced the initial dates for the first leg of the North American 'Earth Rocker' world tour.

The artwork was created by Nick Lakiotes, long time CLUTCH art director, who has worked on previous efforts including: 'Robot Hive/Exodus' and 'Strange Cousins From the West'. 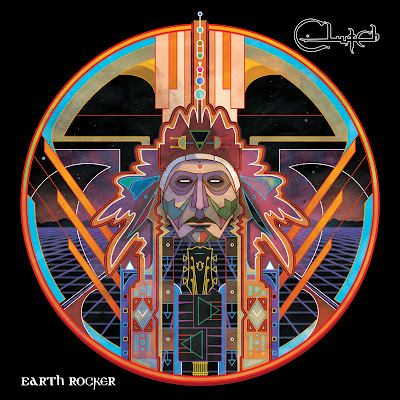 CLUTCH has announced the initial dates for the first leg of the North American 'Earth Rocker' world tour. The dates kick off March 8th in Cincinnati, OH and are currently slated to run through March 24th in Anaheim, CA. Support on these dates will be provided by Orange Goblin, Lionize and Kyng. Tickets for fan club members go on sale today via Pro-Rock.com and tickets go on sale to the general public this Friday December 21st. Look for more dates to be announced in the coming weeks.

Before they hit the road for their annual Holiday run, CLUTCH will be headlining the KBPI "When Hell Freezes Over" show this Friday night December 21st in Denver, CO at the Fillmore Auditorium. To get more information on the show and to purchase tickets click HERE.

CLUTCH's Holiday tour dates kick off December 26th in Washington, DC and conclude with a special New Year's Eve performance in Worcester, MA at The Palladium.

Fans can keep up on the progress of 'Earth Rocker' by visiting the new website www.earthrocker.com. The website is a hub dedicated to all things 'Earth Rocker'. This Christmas Eve www.earthrocker.com will debut a live video of the title track 'Earth Rocker', which was recorded live at The Machine Shop. Fans can expect to see frequent updates including photos, videos from the studio, song title announcements and samples of new songs.