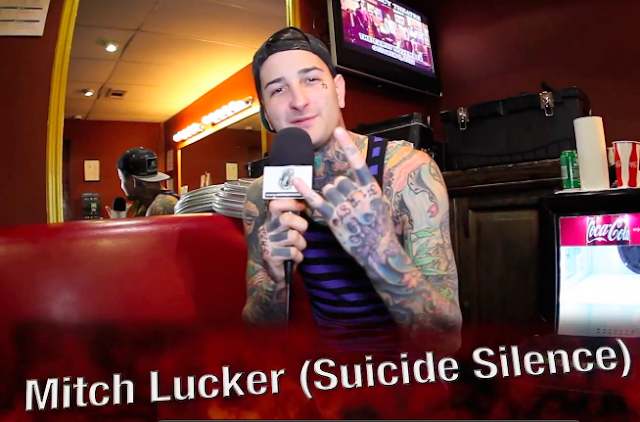 Last night (December 21), the remaining members of SUICIDE SILENCE - Chris Garza, Mark Heylmun, Alex Lopez and Dan Kenny - were joined by many of Heavy Music's finest to pay tribute to their frontman Mitch Lucker. The Heavy Music world was struck earlier this year by the very sad news that Mitchell Adam Lucker passed away at the young age of 28 (More information HERE). According to the Los Angeles Times, Lucker struck a light pole near the intersection of Main and 13th streets and was thrown from his 2013 Harley Davidson. The motorcycle continued sliding south on Main Street and struck a northbound 2007 Nissan Titan pickup.

Joining the SUICIDE SILENCE boys were Randy Blythe (LAMB OF GOD), Robb Flynn (MACHINE HEAD) and Max Cavalera (SOULFLY, CAVALERA CONSPIRACY, SEPULTURA), who were among the "surprise" guests that took center stage to pay tribute to Lucker. The event was hosted by Jose Mangin from Sirius XM and took place at the Fox theater in Pomona, California.All proceeds from the event went towards the education of Mitch's five-year-old daughter, Kenadee Lucker.

Here is a ton of fan filmed footage, gathered by the great folks over at Blabbermouth:

Fans who wish to donate can do so via the link below, with donations of $20 of more receiving a commemorative t-shirt as a token of thanks. All proceeds will go towards the educational fund of Mitch’s five-year-old daughter, Kenadee.

Here is the link to the auction launched by the organizers of the Rockstar Energy Drink Mayhem Festival: http://hornsuprocks.blogspot.com/2012/11/suicide-silence-mitch-lucker-memorial.html
HERE are reactions from the Heavy Music community!

Here is on of the last interviews that Mitch ever did:

Related links:
Official Site of Suicide Silence
Brought to you by HornsUpRocks.com at 1:40 PM