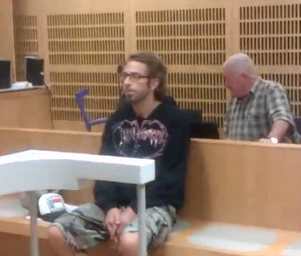 While LAMB OF GOD is currently destroying the United States in support of their latest album 'Resolution' (available now via Epic Records & Roadrunner Records), Randy Blythe's legal nightmare is not over yet.

As previously reported, Blythe was arrested on June 28 this year at the Prague Airport on charges of causing, “bodily harm of the fourth degree, resulting in the death of a fan:” an event that allegedly took place during a Lamb Of God concert on May 24, 2010. Blythe was detained in a Czech Republic prison for thirty seven days before he was released on bail.

The decision means that the the court now has three months to set an official date for the singer’s trial or send the case back for further investigation.

For now, Blythe will continue to destroy ear drums all over the U.S.! Here are the remaining tour dates:

Related links:
Lamb Of God's Official Site
Brought to you by HornsUpRocks.com at 2:15 PM

what a crock of shit these charges are. jesus fn' christ, leave the guy alone CZ!!!

True^^ They should really come to understand about proper venue security.