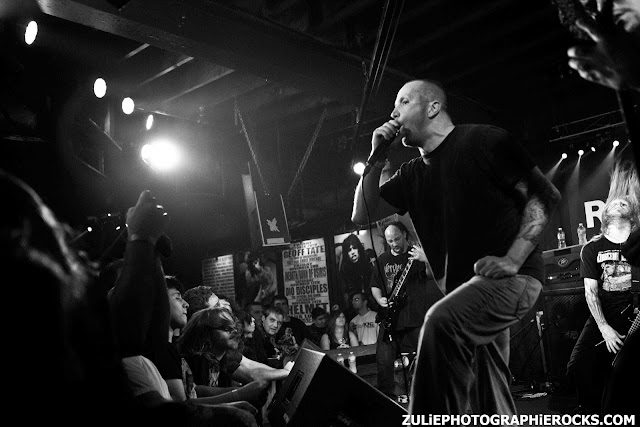 Recently, SUFFOCATION unveiled the track listing for their highly anticipated upcoming release, 'Pinnacle of Bedlam' HERE!. The album features 10 genre-defining-bone-crushing tracks and also marks the return of drummer Dave Culross, who played with the band previously on their 'Despise The Sun' EP. Founding member and former drummer Mike Smith also makes a special guest appearance on the re-recorded Breeding the Spawn track, “Beginning of Sorrow.”

SUFFOCATION have announced that 'Pinnacle of Bedlam' will be released on February 15, 2013 release via Nuclear Blast Records.


As previously announced, the band will be filming a music video for their NEW song entitled "As Grace Descends" on Saturday, January 5, 2013, at Duff's Brooklyn. Fans are welcomed to join the SUFFOCATION party! Here is a quick note from the band:

"This is a video shoot, not a live show. It's free! [You've] gotta be at least 18 or older, but we prefer that you look old enough to be in a bar."

Here is the lyric video for "As Grace Descends":

'Pinnacle of Bedlam' was produced by the band and tracked at Full Force Studios in New York by longtime collaborator Joe Cincotta. The mixing and mastering was handled this time around by world renowned producer/engineer Zeuss (HATEBREED, ARSIS, SUICIDE SILENCE). Cover artwork for 'Pinnacle of Bedlam' was created by artist Raymond Swanland (DEEDS OF FLESH, PSYCROPTIC).

Frank Mullen, front man for New York Death Metal veterans SUFFOCATION, recently gave an interview to Horns Up Rocks that spread very quickly about him no longer performing with the band full time:

We also spoke with bands bassist Derek Boyer about the bands NEW album:

Related links:
Suffocation's Official Site
Brought to you by HornsUpRocks.com at 12:43 PM