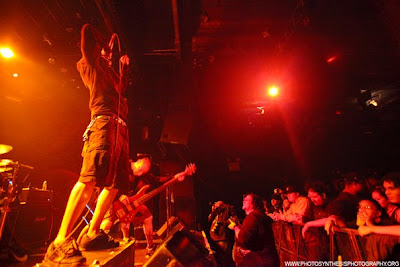 The band Severed from New York City has been taking over Club Europa in Brooklyn on a monthly basis, and are quickly becoming ambassadors of the New York Heavy Metal scene. When we first saw this band in the basement of Santos Party House for "Double Trouble", it was evident that they are a hard working band. Every show we've seen Severed play is full of adrenaline, crushing riffs and a very tight grip.

On May 9th, they celebrated the release of their self titled album to a packed house at Club Europa. What went down was simply amazing. As we have said before, it is only a matter of time before this guys get the exposure they deserve. If you haven't heard their new album or seen this phenomenal band live, we highly recommend that you do. They have a big show coming up on July 24th, at the main stage of Santos Party House for the "No Mercy Metal" showcase. See you there!

Here is some live footage, along with an exclusive interview with their vocalist Christian Geraldino and their bassist John Wiley.