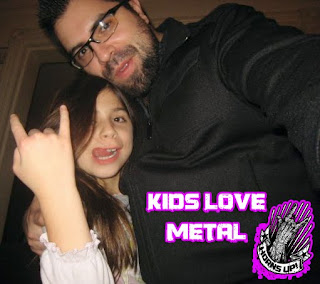 The most important thing in life is family! Without the love, support, and respect from our families, we are inexistent. Sometimes we tend to take our family for granted, because we are too “busy” with insignificant events. Recently, our founder Jo Schüftan interviewed his daughter Sheila for “Saturday Morning Metal with Kara Pain”, which is a new show on Sirius XM Liquid Metal. The segment aired on Christmas day!

Sheila’s radio career started when she was a tiny little girl. Actually, her first words were broadcasted on WQKE 93.9 (SUNY Plattsburgh radio station) to the inmates of Clinton County Jail. Jo would usually bring Sheila to his weekly program called “The Kings Of Chaos”. This is how Sheila learned about bands like Black Sabbath, which is still her favorite band! Sheila’s first metallic words included: OZZY, SLAYER, and of course METAL!!!

Today we present to you a video produced by Jo, dedicated to his daughter Sheila. The video features the radio segment, along with a showcase of Sheila’s many talents (acting, dancing, snowboarding, swimming, wall climbing, fighting, playing the violin, making sand castles).

We want to thank the Liquid Metal crew for their continuous support and dedication to the Heavy Music scene. After ten years of carrying the torch and helping to spread the word worldwide! It is safe to assume that they are the most important Media Outlet in the world, when it comes to Heavy Music.

Here is the video! Dedicated to Jo's familia and his gorgeous bad-ass daughter Sheila! If you want to go On Air with your kid(s), email Kara Pain at kara@siriusxm.com

IMPRINTED by Jo Schüftan (Founder of Horns Up Rocks)
Brought to you by HornsUpRocks.com at 11:47 AM