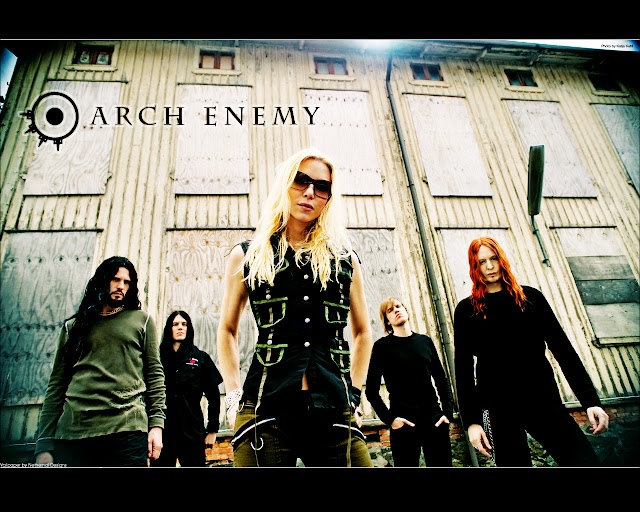 ARCH ENEMY's badass vocalist Angela Gossow has issued the following update regarding the bands decision to take a temporary hiatus:

"[The ARCH ENEMY] European tour was awesome!! Lots of people came to the shows. [We are] very, very grateful for this, given the tough economy all around.

"We know how it feels to be broke. Been there many times. But just like you, we rather spend our last penny on music (or gear for that matter) than paying our phone bill. For that matter, I only have a prepaid card and no phone contract ;-) I hate bills and reminders.

"I love playing live. [It's] a shame I can't bring my home (or at least my bed and my clean bathroom) on tour though, haha..

"After 12 years of continuous touring, I can tell ya, sometimes I think about stopping for good and route for the homely life instead.

"We got the Latin America tour kicking off in November all the way through December and then we'll stop touring for at least six months. We'll just do a few [European] festivals in the summer, like Wacken :-). Will be interesting how that feels. If I get bored with being 'static?'

"I'll miss playing shows, but I am also excited to finally have some time to myself, actually being able to take up an art class, start drawing again, take some vocal lessons for fun, try new sports (like thai boxing or any sort of angry martial arts, haha), spend quality time with my family, decorate my home with framed pictures, paint the walls.. you know, that stuff 'normal' people do when they are not living like gypsies, always on the move.

"It will be nice not having to do pre-production for a tour in my 'off time' but actually allow my mind to rest and stop worrying about travel arrangements, technical riders, ticket sales, budgets, crew, stage production etc.

"I have noticed I am in an constant 'alarm-state' mentally and I don't relax in my sleep either anymore. I dream about figures and band stuff every night.

"I miss my crazy, funny, light dreams.. and simply being worry-free.

"This said, I wont be lazy. We have a massive new live DVD/Blu-ray in the works and it will take up a real chunk of my time to get that together for an autumn 2013 release. We filmed so many shows.. And we will film even more now during the Latin America tour. We got a ton of incidental footage too.. That will be weeks and weeks of sorting out, editing, cutting, mix and master. Plus we got a new album to write and record in 2013 too. It will drop in spring-ish 2014.

"So yeah.. today I am catching up with three weeks of unanswered postal mail, final tour budget, tax office paperwork and shopping for groceries. I will go for a walk later, take a long bath to soak my sore back and neck and try to go to bed before 6 a.m. as I am not on tour anymore ;-)"

Related links:
Arch Enemy's Official Site
Brought to you by HornsUpRocks.com at 5:01 PM