Mike Portnoy to Perform with Stone Sour in Brazil! 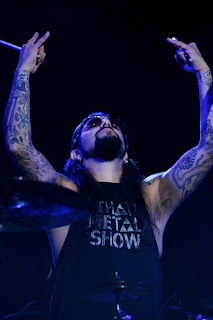 On Monday night Mike Portnoy took center stage at the Metal Masters Clinic at the Best Buy Theater in New York City and demonstrated his amazing abilities as a modern Heavy Metal drummer. Today, it was announced that Portnoy will be performing with Stone Sour at the world-renowned ‘Rock In Rio’ Festival in Brazil on September 24.

The band’s regular drummer, Roy Mayorga, is currently home and anxiously awaiting the birth of his first daughter -- due the very same day as Stone Sour’s Rio show. Roy personally asked his friend Mike Portnoy to fill in for what is sure to be a special ‘once in a lifetime’ event for the fans in attendance. Said Portnoy: “It's my honor and pleasure to be able to help out my good friends in Stone Sour and my brother Roy in their time of need. It's also an unexpected treat for me to get another visit with some of the greatest fans in the world down in Brazil.”

“We've been waiting a long time for the opportunity to come to South America. This year's Rock in Rio should be fantastic. With Roy expecting his first child, we'll charge on without him, but having Mike fill in for this one show will be great. We can't wait to take the stage and lay it down the only way Stone Sour knows how: full on and in your face!" - Frontman Corey Taylor

Plans are afoot for a special EP/DVD release from Stone Sour this Winter, along with a special MP3 giveaway via Stone Sour’s Facebook page. Stay tuned for full details soon.

Related links:
Stone Sour
Stone Sour on Facebook
Brought to you by HornsUpRocks.com at 12:17 PM